Immediately following the opening scene of the game, Leon and Claire are separated on either side of the wrecked truck. This area is not visited in Leon B or Clear B, who instead explore Shopping district east.

This is Flower Street in downtown Raccoon City. There are police barricades not too far beyond the wreckage. The northern walls of the Raccoon Police Station sit across the street.

Claire and Leon both meet at this place with the truck already wrecked, Leon mentions that they should go to the police station after the two clear out the zombies that were trying to kill them.

Upon starting the game, before the area loads the following message is displayed;

In the original PlayStation version of the game there are six zombies will appear on the street as a standard, with a seventh only appearing near the gun shop if those six have not been killed.[1] They can realistically be dodged.

There are no items to collect in this room and the next room is the Gun shop.

There are a total of 32 zombies in this area, the only shootable objects are the lights on the streets, which can drop gold.

The demo featured with Resident Evil: Director's Cut features its own prologue as well.

Resident Evil 2 Preview prologue
Add a photo to this gallery

The Game.com version of the "A" scenario Flower Street.

The wall is extended and a door light is missing from Kendo Gunshop.

Original production backgrounds with a place-holder model for the crashed truck.

These backgrounds were present in the original black label PlayStation release of Resident Evil 2, but were removed in later releases.

Production art of Claire on Flower Street. Note that the "Cool Soda" sign is still present, but smaller images of it to the left are replaced. 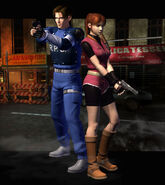 Leon and Claire together. 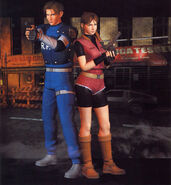 Retrieved from "https://residentevil.fandom.com/wiki/City_Area/Shopping_district_west?oldid=797094"
Community content is available under CC-BY-SA unless otherwise noted.