View source
watch 01:33
Who is Clancy Jarvis?
Do you like this video?
Play Sound
Prime universe
(Capcom's primary storyline)

Clancy Jarvis (クランシー・ジャービス, Kuranshī Jābisu?) was a cameraman for the paranormal Internet series, Sewer Gators. He was involved in the Dulvey Haunted House case of June 2017.

Arriving at the Dulvey House

Clancy assumed the duties of cameraman for the Internet video series around June following the departure of a previous cameraman. In his first investigation with the team, the show's producer, Andre Stickland, picked the Dulvey Haunted House in the American South to film, taking Clancy and the show's presenter, Peter Walken with him.

The three broke into the abandoned house to rehearse the show, but it soon became clear something was wrong when Andre mysteriously disappeared. Clancy and Pete ventured through the house in search of Andre, no longer interested in continuing the rehearsals and wanting to leave as soon as possible.

Finding a lever to a secret passageway where noises were heard from, Clancy and Pete expected to find Andre inside. Reaching a ladder, Peter urged Clancy to climb down first into a basement where he found Andre dead. Clancy was then attacked by Jack Baker and knocked unconscious. When he woke up, he found himself tied up to a chair next to an unconscious Pete.[3] Pete soon woke up himself, found a knife and tried to cut Clancy free from his restraints. However, before he could he was stabbed in the back by a woman, who then approached and stabbed Clancy in the leg. The woman menaced Clancy with the knife, but before she could do more, she was tackled by the injured Pete. The woman continued stabbing Pete as they struggled out of the light of the room, out of Clancy's view. A few seconds later, Clancy saw Pete's decapitated head roll toward him from the shadows. After this, Clancy began to hear the woman's breathing behind him, until she reached out and grabbed at his face from behind, eventually climbing over him to menace him with the knife.[4]

Clancy returns as the playable character for the Nightmare scenario, where Jack captures Clancy during a failed escape attempt and tells him he has "friends" that want to meet him. He then has to fight several Molded and Jack himself as he battles to escape several waves of enemies and survive until 5 AM.

In the "Bedroom" DLC, it is shown that Clancy was captured again and moved to the master bedroom, where Jack's wife Marguerite serves him human entrails as food and mentions that their "daughter" likes him, before leaving the room. Clancy, however, easily frees himself and looks for an escape route somewhere within the room, as well as the adjacent storage room. Eventually, he discovers a hatch underneath his bed. When he makes loud sounds in finding hidden items, he is forced to return to his bed and revert items back to where they were to keep his cover safe from Marguerite. Marguerite gives Clancy more food, but Clancy uses the utensils given to him as part of his escape.

Using the puzzles around the room, he manages to acquire the hatch's key in the storage room, but Marguerite arrives in the room without Clancy in bed. She lunges at Clancy and attempts to kill him, but Clancy manages to stab her in the throat; although this does not kill her, it does incapacitate her. He unlocks the hatch and escapes as Marguerite's threats can be heard.

Clancy gets knocked unconscious by Lucas. He takes him to a room with another person, Hoffman. Lucas forces them to play a fatal game of Blackjack, where the winner can be set free and the loser dies. Clancy emerges victorious, causing Lucas to kill Hoffman with his torturing machines. However, to torture Clancy even further, Lucas decides to challenge Clancy himself in the game, by using Hoffman's corpse as a puppet. In the end, Clancy outsmarts Lucas in the game, but this does not stop Lucas on further torturing Clancy, as he wants to play another game with him.

Lucas brings Clancy to one of his trap rooms with a camera attached to him. Releasing his binds, Lucas tells Clancy to figure out a way to escape from the room, which Lucas claims would be from placing a candle in a cake. After enduring several torturous obstacles, Clancy manages to place the candle on the cake, which is revealed to be an explosive. Clancy had earlier used the tap of an oil barrel to uncover a clue, thus spewing oil around the room. With the exit closed and the oil spilled around the room, the fires triggered by the explosion consume and immolate the manically screaming Clancy, leading to his death.

The Sewer Gators' van is left outside the house, while several newspapers report about the disappearances of the Sewer Gators team. Clancy's face can be seen in a brochure in the van. Before Ethan Winters is put in the same trap room by Lucas, he discovers Clancy's charred body with the passcode to enter the room. However, Ethan manages to outsmart Lucas' trap.

Clancy's death, as well as those of the Baker Family and the other members of Sewer Gators, would later be reported as a consequence of a natural gas leak.[5]

Clancy is playable in Resident Evil 7 Teaser Demo: Beginning Hour. He is played while viewing "Derelict House Footage" tape where his inventory starts empty and he can not use the block action.

He is also the player character in the KITCHEN tech demo.

At some point during the game, you acquire the "Happy Birthday" tape from which you play as Clancy and see that Lucas Baker is dragging you into a locked room, he then cuts Clancy from his restraints and is told to light a candle on a birthday cake. Once you complete the obstacles and light the candle and as you bring it into the room with the cake in it, you realize that there is something leaking from a barrel on a table, Clancy ignores this and puts the candle on the cake, upon doing so, the cake explodes, lighting the liquid (oil) all over the room on fire and the explosion knocks Clancy to the ground. Clancy then realizes the liquid was oil and now he is covered in it and is trapped in the room. He races to the valve (which he found and placed there because it was an obstacle) and tried to turn it but it breaks off, leaving Clancy to be burned alive. Then it fast forwards to Lucas walking into the room after most of the flames are out, and he says to Clancy, "Happy birthday."

From left to right: Clancy, Andre and Pete 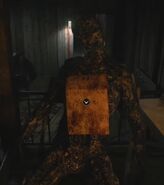