Clint was a mercenary who was scouted by the Umbrella Biohazard Countermeasure Service, an anti-B.O.W. force made-up of war criminals; ex-special forces and guerrillas. It is not known which platoon (Alpha; Beta; Gamma or Delta) he was assigned to or what his mission directives were, but he was provided with a life jacket, suggesting his team were to operate close to the rivers.[1]

Clint's character skin can only be accessed through cheat devices such as GameSharks. He's a Mark-type character and starts with a First Aid Spray in his inventory.

Clint has the following stats: 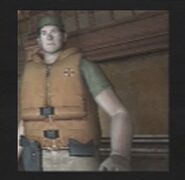