View source
watch 02:05
Wiki Targeted (Games)
Do you like this video?
Play Sound

Clive R. O'Brian was the director of the Bioterrorism Security Assessment Alliance which, at the time of his directorship, was a private, non-governmental organization tackling biohazard incidents, bio-terrorists and biological weapons. He operated under the radio call-sign of "Forkball".[1]

Clive O'Brian was the director of the BSAA during the incident known as the Terragrigia Panic. At the time, the BSAA was a small NGO with limited resources, so although O'Brian was on the ground during the incident, it was mostly as a European-dispatched "third-party observer" while the Federal Bioterrorism Commission took the lead on the rescue efforts.[2][notes 1] Headquartered in the FBC offices in Terragrigia, O'Brian was present when the building was attacked by Veltro-controlled hunters.

Although he shared command of the operation with FBC Commissioner Morgan Lansdale, the two did not see eye to eye. O'Brian was vehemently opposed to Lansdale's plan to use the Regia Solis to sterilize the city, and made this known in a verbal argument with Lansdale in the presence of agents Parker Luciani, Jessica Sherawat and Raymond Vester. Shortly afterwards, the building was evacuated via helicopter and Terragrigia was destroyed.

One year later, O'Brian, along with agents Luciani and Jill Valentine, investigated the presence of mysterious corpses that seemed to be floating ashore on the mainland from the ruins of Terragrigia. The team would discover what would later be revealed as a sample of the t-Abyss virus within one of the carasses, and O'Brian took possession of it.

At around the same time, O'Brian "lost contact" with Chris Redfield and Jessica, who were investigating a remote mountain airbase suspected of harboring Veltro terrorists. He dispatched Jill and Parker to their last known location: aboard the Queen Zenobia in the Mediterranean Sea.

O'Brian provided support for all four agents during their respective missions, but unbeknownst to them, O'Brian was using them all in a gambit to expose Morgan Lansdale as the true force behind the rise of Veltro and the destruction of Terragrigia. Having harbored suspicions against Lansdale since the Terragrigia event, O'Brian hoped to use Raymond Vester, who would pose as a new leader of Veltro, and the Queen Zenobia to force Lansdale's hand and collect incriminating evidence against him. O'Brian himself was engineering the supposed "return" of Veltro, using his own agents to pose as terrorists in an attempt to rile Lansdale.

However, O'Brian once again got into a verbal sparring match with Lansdale, failing to prevent Lansdale from firing the Regia Solis at the Queen Zenobia to cover his tracks. After several tense moments, Lansdale authorized an evacuation for his agents from the sinking ship.

Meanwhile, agents "Jackass" and "Grinder" deduced that O'Brian had been behind the "return" of Veltro and confronted him with the information. O'Brian owned up to the accusation and revealed his true plan to the rest of his agents. At around the same time, Lansdale and FBC forces stormed the BSAA headquarters, placing O'Brian under arrest. However, Jill and Chris managed to broadcast incriminating video footage from Veltro leader Jack Norman's PDA, ousting Lansdale as the true force behind the conspiracy. His own troops placed him under arrest, and O'Brian was free to go.

Soon after the incident, O'Brian succeeded in getting the FBC's resources transferred to the BSAA, greatly expanding the organization. After this final act, he took responsibility for his actions and stepped down as director. He still serves as an adviser to the BSAA and wrote a detective novel from the comfort of his own home.

His book, The Unveiled Abyss, was found in the Dulvey Haunted House.

O'Brian is an unlock-able character in Revelations' Raid Mode. The player must complete the Missions "ABYSS Cleared" by completing all Raid Mode stages on Abyss difficulty level. In the Port, the player simply has to reach level 20 to unlock him. His melee attack is downward chop. His only costume uses a large knife and the basic swing attack.

When playing the part on the beach with Jill and Parker, if you scan him with the Genesis Scanner he will say "What did the scanner pick up? That I'm one sexy mofo, right?"

A book, "The Unveiled Abyss" can be found written by Clive in the living room.

O'Brian is an obtainable diorama figure on ResidentEvil.net awarded as a random prize through using a Genesis Scratchcard. 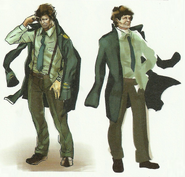 Photograph of O'Brian and Lansdale

O'Brian leaves the BSAA as an director 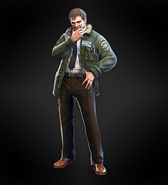 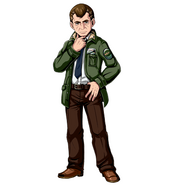