The Combat Shotgun is a bonus weapon available for Resident Evil: Operation Raccoon City. It is a semi-automatic, drum fed shotgun that somewhat resembles the Striker shotgun.

It is featured in The Power Weapons Pack bonus weapon pack for those who preorder the game from Gamestop or purchase the special edition of the game. This weapon has 12-rounded magazine with 48 spare rounds initially. Maximum spare rounds this shotgun may contain are 60. By the action type and reloading sequence, this shotgun is alike the purchasable in-game Juggernaut.

Picture and Description of the Combat Shotgun, taken from the DLC trailer. 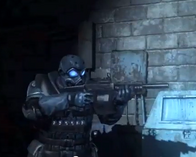