Dr. Curtis Miller was a researcher for the WP Corporation in 2005. He was fired and arrested after his aggressive disapproval of their t-Virus vaccination program. The older brother of Angela Miller, he lost his family in the Raccoon City Destruction Incident and made it his lifelong aim to force the United States to admit its responsibility.

He was used by the company as a scapegoat to hide the real dealers with the bioterrorists - themselves.

While he was inside the Air Dome Laboratory a bomb set off, destroying the building. The G-Virus (most likely provided by Frederic Downing) had infected Curtis, then aided by his younger sister, Angela. He transformed as a U.S Army unit arrived to arrest him and proceeded to kill the commanding officer and several of the soldiers.

He then turned on his sister to use her for breeding. Angela was saved by Leon S. Kennedy when he crushed Curtis with tons of metal schaffling. Soon enough, he began to mutate again.

Becoming even more grotesque than before, he attacked the surviving soldiers who were trying to escape in an elevator, tearing the elevator from its tunnel and hurtling it to the ground far below, killing all inside. He then turned to attack Leon and Angela once again.

Leon and Angela managed to avoid him for a short period of time, but he caught up with them and knocked Leon away while he chased Angela. He managed to regain consciousness for a brief moment when he picks up a picture of his family that Angela accidentally dropped from her pocket and tells her to run away from him and the place that they are in.

As he lost his humanity again, he prepared to attack when suddenly the section he was standing on collapsed and he began to fall a great height. As he began to fall, he used the tail his mutation produced during his second transformation and wrapped it around Angela's foot while she was being held onto by Leon.

As Angela pleaded Leon to let her go, he refused and instead shot Curtis in his skull, causing him to release his sister and plummet to the lowest levels of the complex. Regardless of whether this was enough to kill Curtis or not, the entire facility was then incinerated through its emergency sterilization system, putting an end to him for good.

In the aftermath of the event, Curtis' mutated remains were seen being recovered by TriCell personal.

Curtis with Angela, before mutating.

Ditto, but Curtis is already preparing to attack Angela.

Mutate Curtis looks at the Marine Captain before killing him.

Mutate Curtis in his second transformation. 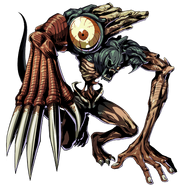 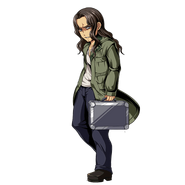 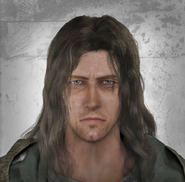