Daughter was a proposed character for Resident Evil 7: Biohazard, who served as the precursor to the characters Zoe Baker and Mia Winters. Daughter was one of the earliest ideas for the game, and appeared in a proof-of-concept video as early as 2014. Daughter was removed from the game by the time the KITCHEN demo was shown at E3, though she appeared in it. She also appeared as an easter egg in the Beginning Hour demo, appearing at random locations on the Sewer Gators tape. 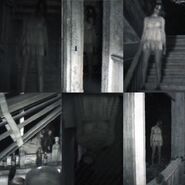 A composite of Daughter locations

Daughter as she appeared in concept art over time