Dave Johnson (デイブ・ジョンソン?) was a soldier in the Bioterrorism Security Assessment Alliance's West Africa branch, serving as a marksman for Captain Josh Stone's Delta Team. In 2009, he participated in the BSAA mission to Kijuju where he was among the casualties.

Prior to his BSAA career, Johnson was an off-road rally driver participating in at least one race at the Rally World Championship.[2] In the BSAA, Johnson demonstrated expertise as a sharpshooter and was provided with a German semi-automatic sniper rifle, a Heckler & Koch PSG-1.

In March 2009, Johnson's unit was ordered into the Kijuju Autonomous Zone to reinforce the SOU agents named Chris Redfield and Sheva Alomar after the deaths of Alpha Team. Johnson was able to shoot a motorcycle-riding Majini during the rescue. Following this, Delta Team established a base camp at a village in the savannah outside Kijuju itself. Johnson later drove to the quarry in the team's Gambit to pick Redfield and Alomar up, escaping a surprise attack on the camp by a Ndesu. Johnson returned after picking radio chatter up on the attack, but arrived too late to save anyone. He was killed by the Ndesu while examining the body of one of his comrades.

Dave firing from a distance

Dave with Sheva at the Port 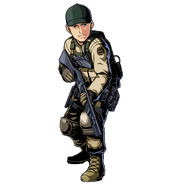