They accompanied him and his assistant to the Harvardville Airport and, with assistance from a local policeman, attempted to apprehend a pair of anti-WilPharma demonstrators wearing zombie masks. Unfortunately, one of them was a real zombie, and bit the cop. The cop quickly turned and along with the first zombie attacked and ate the first bodyguard. The second bodyguard told the nearby innocent bystanders to run away while he shielded the cowering Senator with his body. Despite a valiant attempt to protect both the Senator and the nearby civilians, Davis' second bodyguard was quickly cut down by the increasing number Zombies. Both appear as zombies later in the film. 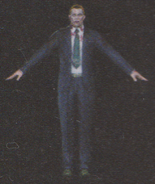 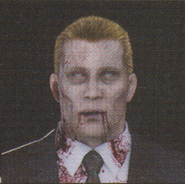 Retrieved from "https://residentevil.fandom.com/wiki/Davis%27_Bodyguards?oldid=803439"
Community content is available under CC-BY-SA unless otherwise noted.