Deborah was born on October 10th, 1992 and was four years younger than her sister, Helena. With their parents having died some time before she turned 20, she maintained a playful and spirited personality as she became a university student. She was very close to her older sister as a result of their parents' death. At one point, Deborah got into an abusive relationship with a man, who beat her to the point of hospitalization. Helena saved her from the abusive relationship by shooting Deborah's boyfriend, inflicting serious injuries. Unfortunately, it was this incident which led to Derek C. Simmons considering using Helena as a scapegoat for his plans.[1] Deborah and her sister were abducted by Simmons three days before the events of Leon's story and were shown to be held hostage by him in the laboratory beneath Tall Oaks Church. Helena tried her best to keep her terrified sister calm. Under Simmons' command, men come to take Deborah away, leaving Helena to futilely beg and plead for them to let her go. Helena offered herself to Simmons in exchange for her sister. Her pleas did nothing as Deborah was dragged away to a then-unknown fate.

Simmons used Deborah as a bargaining tool to get her sister to help him carry out the bioterrorism attacks on Tall Oaks and assassinate the President . Despite Helena obeying Simmons in causing the death of the President, Deborah was ordered to be terminated. Instead, members of 'The Family' decided to intervene. Rather than kill her and dispose of the body, 'The Family' wanted to see what the C-Virus would do to her youthful healthy body. She was injected with the virus soon after and kept under observation. Despite high hopes and excitement regarding her mutation, Deborah's body showed no visible signs or effects of transforming. After an hour of waiting, 'The Family' had to abandon their plans and evacuate Tall Oaks before it was eradicated to quarantine the area. Disappointed, they left Deborah in the lower levels where Leon and Helena happened to find her.

After delving into the depths of the Tall Oaks Church, Leon and Helena found Deborah lying unconscious on a small wooden table. Deborah was awakened by her sister and they had a very brief reunion before Leon demanded to know what was going on. Helena promised to tell him everything once they got Deborah (who was already experiencing strange symptoms) out of there. Leon agreed and proceeded to fight his way through the underground caverns while Helena followed him, carrying a very sick and weak Deborah on her back. They eventually made it down to a lower level before being forced to stop as her condition worsened. Deborah became even more ill, holding her chest in pain, before suddenly bursting into flames as she screamed in agony. Leon was forced to hold Helena back as Deborah transformed before their eyes, a strange goo hardening over her like a shell. They watched in horror as the Chrysalid cocoon began to crack open and a slimy, mutated Deborah emerged.

Before anything else could be done, Ada Wong shot Mutant Deborah (モンスターデボラ, Monsutādebora?) in the head with her crossbow.[2] After a brief confrontation between the three, Helena went to her sister's side and held her in her arms, apologizing for what had happened, before Deborah began further mutating and violently pushed her away. This triggered a battle with the mutated Deborah Harper as Leon, Helena, and Ada fought to survive. Despite Helena's numerous pleas to not harm her sister, Ada reminded her that Deborah was trying to kill them and that she should put her down if she had any sympathy left for her. The three of them then attempted to escape the catacombs on a mine cart but Deborah pursued them and caused the cart to crash, leaving Helena trapped on a platform while her sister moved in to kill her. Leon and Ada acted quickly and ruptured Deborah's remaining appendage which momentarily stunned her, causing her to stagger blindly off the edge of a cliff just before Helena grabbed her hand. Helena promised she would avenge her sister, begging for forgiveness, and released Deborah to fall to her death.

Before mutating, Deborah experienced searing pain as the C-Virus spread throughout her body. Spending her final moments suffering, she burst into flames screaming in agony. After emerging from the chrysalid, Deborah no longer appeared tormented, but instead developed feelings of ecstasy and delight in her new form; laughing maliciously as opposed to writhing in anguish. The only other behavior shown after mutation is an over-sexualized demeanor towards herself and others. These unique characteristics remain exclusive to her mutation, and is otherwise not known to be common traits among the other infected. It could be that Deborah was made to be a breeder for the C-Virus explaining her actions. 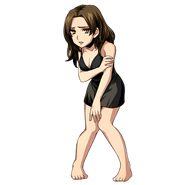 Deborah in Clan Master.
Add a photo to this gallery

Retrieved from "https://residentevil.fandom.com/wiki/Deborah_Harper?oldid=554802"
Community content is available under CC-BY-SA unless otherwise noted.