The Dino Crisis horror franchise was founded by the creators of the Biohazard series, and is similar in that the player controls an operative who is equipped with minimal weapons and supplies while surrounded by vicious creatures, and must fight to survive. Due to the similarities in gameplay between the two franchises, the first Dino Crisis game was sometimes referred to as, "Resident Evil with Dinosaurs"

Dino Stalker was, in actuality, the third entry in the Gun Survivor series of GunCon titles; the three other entries were Resident Evil titles. This game continued onwards from Dino Crisis 2's plot. In 2003 Capcom released the fourth game, Dino Crisis 3; due to an unknown decision, the PlayStation 2 version of the game was cancelled, rendering it an Xbox-exclusive. Its focus on an original story outside of the Third Energy disaster-mythos was criticised by fans as a radical departure from the series roots.

The first Dino Crisis had similar controls to Resident Evil 3: Nemesis, which was released nearly three months later (A key difference was that Regina could move while aiming). Both games featured the heroine pursued by a seemingly unbeatable monster (the Nemesis and the Tyrannosaur). The player could create their own ammunition (through gunpowder in Nemesis and mixing chemicals for darts in Dino Crisis). A demo for Dino Crisis was present in Resident Evil 3. In addition, protagonist Regina's costume was available as a bonus unlockable outfit that Jill Valentine could wear through subsequent playthroughs. In Resident Evil Survivor, there are posters for Dino Crisis on the walls of the Arcade.

Dino Crisis 2 used the combo system, which had the player kill numerous enemies in a room within a certain amount of time between each kill, to gain points. These points would be used to buy weapons, ammunition and health. Resident Evils 4 and 5 used a similar combo and timing system for their Mercenaries minigames. It was notably much more action-oriented than the original game, to the point where there were no ammo limits.

Dino Stalker was the third game in the series, as well as the third in the Gun Survivor series. The game was similar to Time Crisis, with the player killing enemies to add time onto gameplay. It relied upon First Person view like other members of the GS series, and used similar controls.

Dino Crisis 3 brought back the Combo system in 2003 and changed the gameplay of the series considerably, similar to how Resident Evil 4 and 5 introduced a new combat and camera control system. However the change in Dino Crisis 3 proved fatal, and caused the game to sell poor and thus cancelled the series entirely. 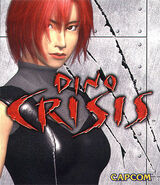 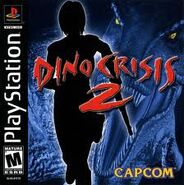 Add a photo to this gallery
Retrieved from "https://residentevil.fandom.com/wiki/Dino_Crisis?oldid=756343"
Community content is available under CC-BY-SA unless otherwise noted.