Don was a citizen of Raccoon City during the t-Virus outbreak of 1998. He is a caucasian man, appearing in his late 40s or early 50s, with short, brunette hair, a moustache and an ash-colored suit. His only visible injury is a large laceration above his right eye, which likely eventually caused the infection that mutated him into a Zombie.

Don is part of a 5 character set that can be unlocked in both Outbreak games via collection menu. He is a Mark-type character and has the following stats:

He starts with a box of 10 Handgun rounds in FINE condition.[1] 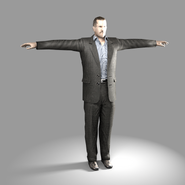 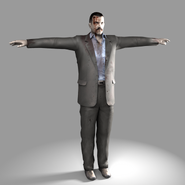