Donna Beneviento was a mutant human doll-maker who resided in an Eastern European mountain range. Dressed in a black garb, she was usually seen with her doll, Angie, through which she often communicated.

Donna Beneviento was born into gentry sometime in the 20th century. The family of House Beneviento had ancestral links to Berengario, an ancient mutant in folklore said to have settled the region with three others, from whom the Dimitrescu, Moreau and Heisenberg families are descendant. Whether this feudal rule over the region was continually maintained or had disappeared by the Great War is uncertain, though Miranda - a prophet serving the Black God - sought to establish their descendants as a council controlling the region under her oversight.

Over the century, the Beneviento family slowly fell apart; her parents committed suicide when she was still a child.[4] Due to an undiagnosed mental health problem, Beneviento developed deep-seated interpersonal anxieties which kept her largely isolated, preferring to talk to people through Angie, a doll made by her father. Donna's adulthood was mostly focused on her hobby of doll-making, effectively replacing her deceased family. Whether Claudia was a sister or her only daughter is uncertain.

At some point in adulthood, Donna was implanted with the Cadou. She survived the experimentation with little change in physical appearance or cognitive development, gaining the ability to secrete a psychoactive chemical which could induce extreme, even violent hallucinations in people. She was, however, judged to be a failure by Miranda, who saw her as mentally ill and underdeveloped.[5] In spite of this, Donna was welcomed as an adopted daughter, and given a council seat at the Cave Church as one of the Four Lords. This had a positive effect on her and she would talk about it to her gardener, though was still not able to express it without Angie.[6]

When Ethan Winters was captured by Heisenberg, the four house lords held a meeting to discuss his fate. Donna stayed quiet throughout the meeting, interacting with the others through Angie.

Following Ethan's battle with Alcina Dimitrescu, he embarked on a mission to retrieve all of Rose Winters' body parts. The first area he was able to visit was House Beneviento. On the way to the estate, he unwittingly inhaled the pollen of Mold-infected flowers, allowing Donna to taunt him with hallucinations of his dead wife.

Upon reaching the house and travelling to the basement, Ethan came across the seemingly unattended leg flask on top of Angie. As he tried to grab it, however, Donna cut the power and the flask disappeared, along with all of Ethan's weapons. As Ethan searched for a way to escape, she taunted him with dolls resembling Mia, recordings of Mia's private thoughts, and mementos of their time raising Rose. As he searched further, he was pursued by a grotesque fetus-like monster which echoed a baby's wails throughout the halls. It is likely that many of the things he experienced after reaching the basement - including both the monster and the loss of his weapons - were hallucinations created by Donna.

When Ethan managed to return to the ground level of the house, Donna appeared with Angie, begging him not to leave. She sent her dolls to attack him, but he managed to fend them off. Angie hid throughout the house, instructing Ethan to find her before her "friends" killed him. He managed to find Angie three times, stabbing her with a pair of scissors each time. After stabbing Angie once more, the illusion broke and Ethan realized he had been stabbing Donna herself all along. He only caught a glimpse of her before she calcified and crumbled away, leaving behind a lifeless Angie and a piece of the Four-Winged Unborn Key; afterwards, a hidden pedestal with the Legs Flask was revealed near the front door of the mansion.

Donna has the ability to divide her Cadou among dolls, allowing her to control them remotely. She normally uses this to animate Angie for use as a companion and mouthpiece, but she can control several dolls at once in order to attack Ethan. Her mutation also allows her to secrete a pheromone which controls plants infected by the Mold; she can induce hallucinations in those who have inhaled the pollen of the infected plants.

As a side effect of her mutation, Donna suffers from a debilitating mental illness, which seems to have given her a childlike mentality while exacerbating her agoraphobia and fixation on dolls. Despite this, she remains a talented dollmaker, even outfitting some of her creations with retractable bladed limbs for combat purposes. Unlike most Cadou-mutated entities, her physique is seemingly no different from a normal human, apart from a mutated abscess growing over her right eye. Due to this and the relatively mundane means of her death, it's likely that she is the weakest of all the Four Lords in terms of physical ability.

Unlike her fellow Lords, Donna Beneviento never transforms or even fights Ethan directly, instead inducing hallucinations in the player. Her final encounter involves pursuing Angie around the first and second floors of her house in order to stab her in the head with the Scissors. Angie's first hiding place is always the second floor bedroom, and her subsequent hiding spots will be exclusively on the first floor. Angie can be easily overlooked if the player is rushing, but she can be distinguished from the other dolls by her white dress and her position; she sits on the floor with her head slumped forward while the other dolls are standing up. Once the player has stabbed Angie three times, the hallucinations will end and they will be revealed to have stabbed Donna herself to death.

If the player takes too long to find and stab Angie during the "game", they will be attacked by other dolls crafted by Lady Beneviento. As the player has no healing items, each hit cannot be healed; the health of the player prior to the fight is important to determine how many hits they can take. The doll attacks will be preceded by increasing laughter and shaking from the dolls standing around the house. The attack from these dolls is also unavoidable once triggered, as they attack the player during a cutscene. Angie can be seen to fly to a new hiding place when the dolls attack. 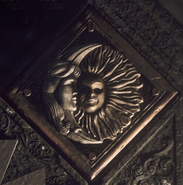 Portrait of Donna Beneviento and her doll Angie.

Donna's corpse after being stabbed by Ethan.

Donna Beneviento with Angie standing in the living room.

Donna Beneviento after she dies.

What's left of Donna Beneviento from Ethan's point of view. 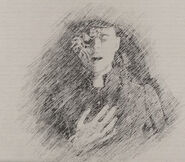 Sketch of Donna in Ethan's Diary