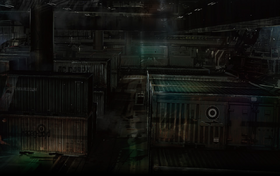 The East Slavic B.O.W. Lab was hidden beneath the Presidential Palace in the town of Holigrad. Built by president Svetlana Belikova, it was used to develop Tyrants for use in the East Slavic Civil War, in order to help facilitate the East Slavic Republic's membership into the international community. It also housed the Control Plaga given to the rebel forces by the Council of Elders.

After her fight with Svetlana in the palace above, Ada Wong is subdued and confined here. Easily escaping through the use of a knife (hidden in the heel of her shoe), Ada then makes her way to the central "hive", in which the Plaga are contained. Having also made his way down into the subterranean facility, Leon joins her and the two are then confronted by Svetlana and her guards. Leon accuses Svetlana of releasing the Plaga in the first place, something which she neither confirms nor denies (only announcing her status as president of the country), before Buddy and his Lickers arrive to wreak havoc on the facility. During the ensuing massacre, Ada manages to escape while Leon works to kill the Lickers, one by one. As his Lickers are destroyed, Buddy angrily tries to shoot Svetlana, only to find her shielded by a bulletproof glass wall. During this confrontation, Svetlana reveals that the Council of Elders has sided with her in exchange for the profits from oil drilling on the rebel forces' land.

As Svetlana escapes, she releases the Tyrants which had been contained within the facility. Barely managing to escape back through the elevator shaft, Leon and Buddy are pursued by the Tyrants back up to the surface.

After the conflict in the East Slavic Republic is resolved, Ada Wong is revealed to have stolen a Plaga specimen, which she intends to sell to an unknown individual, in exchange for the removal of her international arrest warrant.

Retrieved from "https://residentevil.fandom.com/wiki/East_Slavic_B.O.W._Lab?oldid=630844"
Community content is available under CC-BY-SA unless otherwise noted.