Second Class passenger car A is a room on the Ecliptic Express, an appears in Resident Evil 0 and Resident Evil: The Umbrella Chronicles.

This train car seats thirty-two passengers, with two doors leading to the outside being in the middle of the car. On the walls against the Dining Car and Second Class passenger car B doors is Oswell E. Spencer's personal emblem.

As a result of the Leech attack, the car is in a disorganised condition with obvious signs of struggle, evident by documents being littered along the floor. Bloodstains can be seen on the seats and luggage. The door to outside opposite the one Rebecca entered has also had its window smashed. In some places when the room is first explored, the arms and legs of corpses can be seen, but no corpses are blatantly shown.

Entering the room after meeting Billy Coen will trigger a cutscene where Enrico calls Rebecca to warn her about Billy. One of the Zombies in this room wakes up after this cutscene. Before this it is simply resting on its seat. If the player does not kill the zombified train staff in Passenger Car B and walks through here to the Dining Car, those Zombies will enter this room.

After having visited the Operator cab and the countdown to the train crash begins, Edward will appear here as a Zombie. If the player enters as Rebecca, a scene will play where she discovers him; if playing as Billy, nothing will happen.

The door to Passenger Car B. Note the Spencer emblems on either side of the door.

The middle of the car where the player starts. Note the smashed glass on the other door.

The aft end of the car leads to the Dining Car. Note the sign reads "Restaurant Car" instead.

The Edward Zombie is encountered here later in the game. 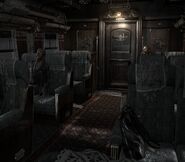 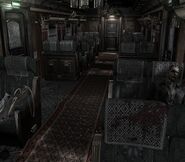 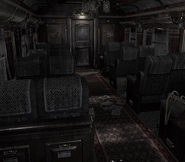 Retrieved from "https://residentevil.fandom.com/wiki/Ecliptic_Express/Second_Class_passenger_car_A?oldid=746701"
Community content is available under CC-BY-SA unless otherwise noted.