Elaine Hendrix is an award-winning American actress and animal rights activist. She was the motion capture actress and face model for Alex Wesker in Resident Evil: Revelations 2.

In April 23, 2015, she posted a blog on The Pet Matchmaker detailing her role as the model of Alex Wesker and how she realized her role after being asked about it, she also detailed how she was approached to be a model for the game and the fact that she agreed to give her image and motion capture as long as her character "doesn't kill animals" in the game. She also held an Alex Wesker fan art competition, awarding the most liked fanart on her Facebook album, her choice and a random winner with a copy of Resident Evil: Revelations 2 autographed by her and a concept art of Alex.[1] 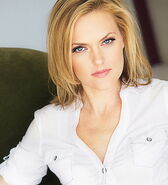 Elaine on set as Alex Wesker

Elaine on set as Alex Wesker

Retrieved from "https://residentevil.fandom.com/wiki/Elaine_Hendrix?oldid=776319"
Community content is available under CC-BY-SA unless otherwise noted.