Escape For Halloween was a Twitter campaign held by @dev1_official which started on October 28, 2019.[1]

A special website was set up by Capcom with a challenge, players are supposed to escape the Mastermind to get to a halloween party.

There are a total of nine "situations", these are essentially questions and players must select the right choice to proceed to the next situation. The correct answer will change every time the player retries the game, however, it is impossible to fail the first situation.

Whenever a death happens, the player can then share their progress on Twitter. Those lucky enough to reach the end and choose to select to share their result will have their tweet retweeted by @dev1_official.

Japanese players could also have won a Resident Evil: Resistance t-shirt by following the instructions shown in the website, which would then add them to a raffle.

Ultimately, only 13 players worldwide were able to reach the end of the game.[2]

Screen capture of the website during the campaign period 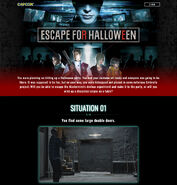