Dr. Ethan was the senior doctor and hospital director of the Raccoon General Hospital in 1998, and was an active participant in the research for a t-Virus vaccine.

As the infected began flooding hospital rooms awaiting treatment, Ethan led an effort to research a vaccine for the virus, colloquially known as "Cannibal disease". The development reached its testing stages when the staff began transforming themselves. Ethan meanwhile wrote notes regarding his experiences with the infection in hopes that someone could use his notes to develop a cure, well aware he would not be able to complete it.

Ethan is a playable character in Resident Evil Outbreak.

There is a second version of him used for Zombies that can only be used with cheating devices. This version lacks proper stats resulting in being unable to damage enemies and running very slow. The only way to fix this is to use stat modifier cheating device codes.

Yet another version of him exists which is also statless. However, this version seems to just be a duplicate of his playable version in appearance. 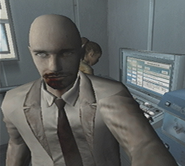 Retrieved from "https://residentevil.fandom.com/wiki/Ethan_(doctor)?oldid=487909"
Community content is available under CC-BY-SA unless otherwise noted.