Evgeny Rebic (Евгений Ребич) was a native to Sejm Island.

Evgeny used to work as a miner and lived in the town with his daughter Irina until 2009, when people started to become "sick" and the island got overrun with creatures. Refusing to leave the island, he fled to live in the sewers. In 2011, Evgeny encountered Claire Redfield and Moira Burton but refused to help them, blaming outsiders for destroying his home.

Evgeny is seen later in the story when he rescues Moira from near death (after she saves Claire from the collapsed debris during their escape of the tower). At first, he is reluctant to assist her, but he allows her to live with him as long as she agrees to follow his rules and join him on his hunts. When asked by Moira if they could search for an escape off the island he refused.

Because of this refusal, Moira left Evgeny's sanctuary one night to find a way to escape the Island. However, her efforts were a disaster; she not only attracted the attention of a horde of Afflicted, Ironheads and even some Vulcanblubbers, but she failed to throw them off as she fled back to Evgeny's sanctuary. Consequently, she and the angry Evgeny had to fight off the attacking horde of t-Phobos monsters, and narrowly managed to survive.

This strained their partnership considerably, but they managed to make it up to each other. They continued their life of hunting and foraging until six months passed; Evgeny began to succumb to a lung disease of some sort, but there were more immediate concerns as well.

Although most of the t-Phobos creatures decayed away, dying or transforming into the Rotten, a new enemy reared its head in the form of Revenants. These more dangerous Uroboros creatures mindlessly sought out and killed all life around them, and did not hide during the day the way the Afflicted had.

Consequently, game became scarce and Evgeny decided to risk exploring the town for any food and supplies they could salvage; better to stockpile what they could then risk it being ruined by the Revenants.

After some time spent searching they encountered a document listing the inhabitants taken to the nearby mines to be experimented on. The list named Evgeny's missing daughter, Irina Rebic, as one of those taken. Seeking some sort of explanation, they set off to the mines. Moira, though suspecting the worst outcome, decided it was best to give Evgeny closure, something she feared her father might not get if she was to die on the island.

When they discovered a letter from Irina, Evgeny faced the reality that she was gone, leading to him to give up on life and lock himself away from Moira to spend his last moments alone to be at peace with his daughter, only to inspire Moira further to survive on the island to see her father once more.

He was later found dead by Barry Burton and Natalia Korda.

In his earlier days, Evgeny showed a deep love for his wife and daughter. After his wife passed on, he continued to show the same love for his daughter up until she eventually disappeared.

After her disappearance, Evgeny retreated to the sewers where he lived in seclusion, occasionally coming out in the wilderness to hunt. This seclusion was formed from a lack of trust with outsiders because of the experiments done on the island by the benefactor sponsoring the mining operations on the island. His bitterness to outsiders can be shown when he encounters Claire and Moira. He lets them leave but says that they should die their own deaths and let him have his.

Despite this, he seemed to care about human life as he rescued Moira from the wreckage of the tower and patched her up. His relationship with Moira was bumpy at first with them arguing. Evgeny seemed to find Moira's frequent use of foul language offensive and would often tell her to "wash her mouth out with soap". Evgeny often referred to Moira as Kroshka (Russian for "baby") due to her being close to the same age as his lost daughter, Irina. Meanwhile, Moira referred to him by various names including "Old Guy", "Rasputin, and "Dinosaur". Despite their disagreements, over the six months of being together, the two formed respect for each other.

Evgeny pointing his rifle at Moira 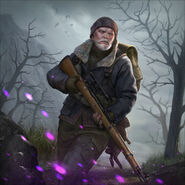