The Executioner Majini was a human victim of the Type-2 Plaga. Either by choice or by the parasitic influence, he joined the Instigator Majini's Islamist rebellion in Kijuju, which saw the deaths of perhaps hundreds of perceived foreigners and race traitors.

This man's life before the rebellion is unknown. When implanted with a Plaga, he reacted differently to its chemical secretions than other people. While enhanced strength was a common side-effect, his was more radical than others. Furthermore, growth hormones led to a significant change in height, making him a towering figure among the other Kijujuans. By mid-January 2009, he had taken up the role of executioner in the Instigator Majini's rebellion, decapitating his enemies.[1][excerpt 1] The Executioner was killed at the square when the audience spotted BSAA agents in the area.

The Executioner makes his appearance in Chapter 1–1, where he destroys a gate separating Chris Redfield and Sheva Alomar from the rest of the square.

Other Executioners appear in "Desperate Escape", which re-cycled Majini like the Instigator.

The Executioner is slower than the Town Majini, and his attacks are quite reckless to the point of hitting other Majini; he can be used by the player to take out enemies close to him in Chapter 1-1. He's quite dangerous for players fighting him for the very first time in a new game, as they lack any proper firearms (shotguns and magnums), relying on the handgun and grenades, if any. 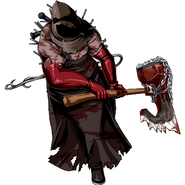 Executioner being killed in TEPPEN.
Add a photo to this gallery

Retrieved from "https://residentevil.fandom.com/wiki/Executioner_Majini?oldid=808783"
Community content is available under CC-BY-SA unless otherwise noted.