He is seen as a modified and more powerful version of the regular Executioner Majini. He can easily be identified because his fiery axe gives off light. Unlike the regular version, this one has a sort of white-blue skin with underwear and an apron around his stomach.

He has a noticeable Plaga or fleshy part on his back similar to the Garrador. It can easily be seen when he is chasing the player.

The Executioner can be found in the Desperate Escape side story of Resident Evil 5. He is fought towards the end if the player is up against Base Majini set of enemies.

He also makes an appearance in Resident Evil: The Mercenaries 3D, where he appears as a sub-boss in the EX Missions.

His moveset is the same as the regular one, however, he can absorb far more damage; in some cases, Albert Wesker (Midnight) or Sheva Alomar (FairyTale) can unload an entire cylinder from their S&W M500's into him without the Executioner dying.

The Town Majini that usually accompanies him makes it harder to shoot the Executioner. He is, however, far easier to kill when with Albert Wesker's S.T.A.R.S. uniform or Midnight outfits, and Sheva's Fairy Tale or Business outfits, since those four contain powerful weapons such as the SIG P226, Samurai Edge, Hydra, Desert Eagle, and the S&W M500; Chris Redfield (Safari) and Josh Stone can also work wonders with their Rocket Launchers. When killed, he will give 15,000 points (gold), the largest number of points attainable from any sub-boss.

The Red Executioner Majini returns as a Sub-Boss within the EX Missions in the game. His attacks and movements are identical to those of the normal Executioner though he moves and attacks much faster. He is arguably the strongest of all the sub bosses in the game rivaled only by Giant Chainsaw Man. Like Giant Chainsaw Man, he can take a full cylinder of Barry Burton's S&W M500 and still not die. He also hardly makes any noise and is the most silent enemy within the whole game. Example of this is that he will sneak behind out of nowhere, not making any sound and instantly send the player into dying status, causing confusion among players. He is also very hard to stun, compared to other sub bosses. 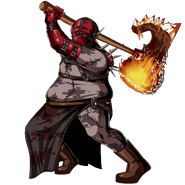 BOW Art from Minna to BIOHAZARD Clan Master.
Add a photo to this gallery

Retrieved from "https://residentevil.fandom.com/wiki/Executioner_Majini_(Red)?oldid=680854"
Community content is available under CC-BY-SA unless otherwise noted.