The Stinger is a weapon in Resident Evil: Operation Raccoon City.

The Stinger is the standard weapon of Nemesis. It is not usable by players during the USS campaign. However, in the Spec Ops mission I Now Know Why You Cry, it is seen being used by humans. First, a Spec Ops soldier uses one to destroy a barricade blocking Echo Six's path. Later on, Echo Six encounters a USS squad using the Rocket Launcher. After killing the soldier carrying it, players can pick up the Stinger-based launcher. It has one shot loaded, and three in reserve in the side-mounted magazine. 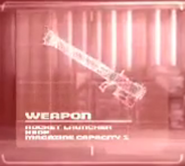