Start a Wiki
watch 02:57
The Loop (Games)
Do you like this video?
Prime universe
(Capcom's primary storyline)

Mold, by contracting the fungus via an E-Series subject

The Fat Molded (ファット・モールデッド, Fatto mōrudeddo?) is an enemy that appears in Resident Evil 7: Biohazard.

Lucas Baker had a Fat Molded inside the barn (whom he nicknamed "Fat Man"), which he promptly dispatched to fight Ethan Winters after he reactivated the elevator, announcing his presence as if it were a wrestling match. Ethan eventually managed to destroy the Molded, causing Lucas, while stating that he was down for the count, to admit he never liked the creature anyway.

Two more of the normal Fat Molded are encountered when Chris has to face off an onslaught of a horde of Molded. There are also a handful of headless variants that sprint at Chris and explode within proximity, damaging him.

Two Fat Molded are encountered by Joe Baker. One before he can proceed to the church and a second inside the Old House, which is swiftly dealt with by using the AMG-78.

In the Joe Must Die difficulty, more Fat Molded are encountered than normal.

Fat Molded are bloated versions of Molded. They appear to have significantly more muscle mass than their original counterparts, and have the ability to store hot vomit inside of their bodies. The Fat Molded is also more resilient compared to its other Molded brethren.

Fat Molded can attack by expelling acid, that they shoot from a distance. As opposed to the other variants, the Fat Molded moves the slowest. They can withstand an exceptional amount of damage.

When encountering the Fat Molded in the barn, it is highly recommended to take cover behind the hay stacks to avoid the vomiting. The Fat Molded have a counterattack where if the player shoots them when they are in a neutral state of not attacking, they will immediately start an attack, oftentimes, they will use the short range vomit attack as their counterattack. This can catch inexperienced players out. If the creature is in mid-animation of vomiting, you are given a short opportunity to sneak around the hay stacks and unload on the head with the shotgun or Burner. If being chased by the creature, shooting it in the legs with the shotgun will reduce mobility, giving you ample time to flee. Avoid their corpse after putting them down as they'll explode causing the player moderate damage if within the radius. An important thing to remember is the Fat Molded can also stun other enemies when it expels acid, leaving them vulnerable for a few seconds. This can be useful if the player is encountering the Fat Molded and other Molded in the area.

Encountering the Fat Molded as Mia Winters should only require detonating two Remote Bombs and unloading two MPM Handgun head shots on the creature to kill it on standard difficulty.

The regular Fat Molded seen in the main story also appear, along with ones that are headless and explode. The headless variants should be shot at immediately with the pistol to prevent them from closing in on Chris and exploding. If the player so chooses, they can take a more risky approach and try to deflect the Fat Molded's Charge attack and also deflect the Headless Fat Molded's Explosion Attack. When dealing with the ones that have their heads, one RAMROD shot to the head can take them out (this works on Normal and Professional Difficulty). Neuro-stun Grenades can help in paralyzing them, opening them up to a headshot.

The Fat Molded are also encountered in this DLC. Luckily, thanks to the fact Joe only uses his bare hands, the Fat Molded will not emit acid from the spot where it was hit, but it will still retaliate with an attack if it is hit while it is not in any animation. One key difference to note with the Fat Molded on this DLC is that they are quicker to recover from their attacks. Also, if the player damages the Fat Molded enough, they will kneel down on the ground, then counter with an acid attack. Staying behind them while they are doing this helps in avoiding it.

A good strategy against the Fat Molded boss is to simply circle around it while you are punching it. This will force the Fat Molded into a loop where it will always use its close-ranged vomit attack, which can be avoided by a simple sidestep. The only problem with this strategy is that it only works in areas that offer a lot of space. 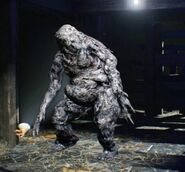 Add a photo to this gallery
Retrieved from "https://residentevil.fandom.com/wiki/Fat_Molded?oldid=810334"
Community content is available under CC-BY-SA unless otherwise noted.