The Federal Bioterrorism Commission was a government commission set up for handling bioterrorist operations. It was led by Morgan Lansdale.[1] The FBC was involved in the 2004 bio-terror attack on the floating city; Terragrigia. Parker Luciani and Jessica Sherawat, both BSAA agents are seen as members of the FBC in 2004.

While there are no publicised reports of biological outbreaks since the 1998 Raccoon City Destruction Incident,[2] the financial blockade on Umbrella U.S.A. led to Umbrella's rogue researchers selling bio weapons to the black market.[3][notes 1] The threat of a potential outbreak became significant enough in 2001 that the commission came into being.[4] This would be a smart decision as the events of the following year proved to the US government that bioterrorism was a real threat, with black-market trade in South America and a bioterrorist missile threat being made on the US after an outbreak on the Spencer Rain cruise liner.

While USSOCOM and USSTRATCOM took part in those particular engagements, the FBC's earliest known engagement was with the bioterrorist attack on the Mediterranean city of Terragrigia in 2004 where the idealogical-turned-extremist movement, Il Veltro was involved. The FBC was under heavy criticism during its role in the Terragrigia Panic. It refused to allow the European Union members to assist in operations and only agreed for the Bioterrorism Security Assessment Alliance to take part as an independent observer. The FBC made the even more controversial decision to pull out of the city and use the city's own power source - the orbiting Regia Solis satellite - to destroy the city with overwhelming levels of solar rays.

In 2005, responding to the reports that the members of Veltro returned, FBC agents, Raymond Vester and Rachel Foley are dispatched to the derelict Queen Zenobia to assess the threat to him around the same time that the BSAA agents, Jill Valentine and Parker Luciani are also dispatched to the vessel. They did not know that it was all a gambit orchestrated by BSAA Director, Clive R. O'Brian to expose Morgan Lansdale as the true force behind the rise of Veltro and the destruction of Terragrigia.

Lansdale made several attempts to cover his tracks such as firing the Regia Solis at the Queen Zenobia, releasing B.O.W.s from the ship's lab to deal with Jill and Parker and having Jessica Sherawat activate the destruct system. Finally, the FBC, accompanied by Lansdale invaded the BSAA headquarters and ordered the arrest of O'Brian on false charges of conspiring with Veltro. After Jill and Chris Redfield killed an infected Jack Norman and broadcasted incriminating evidence against Lansdale which was in his possession, O'Brian was released and Lansdale was placed under arrest and relieved of his position as the Commissioner of the FBC. In the aftermath of the Queen Zenobia Incident, the FBC was disbanded and the remainder of its agents and resources are transferred to the BSAA.

By 2011, a former FBC member and Lansdale's pupil, Neil Fisher planned to create another biohazardous outbreak like the Terragrigia Panic to cause fear and revive the FBC with other like-minded individuals. Neil made a deal with Alex Wesker to obtain a sample of the Uroboros virus by selling the TerraSave members for her fear experiments. However, he was betrayed by Alex and infected with the Uroboros virus, ending any possible revival for the FBC.

The FBC possessed few weapons models, which were seen in the Terragrigia Panic and the assault on the BSAA Headquarters. 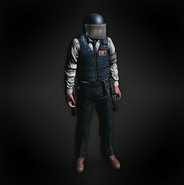 Retrieved from "https://residentevil.fandom.com/wiki/Federal_Bioterrorism_Commission?oldid=809423"
Community content is available under CC-BY-SA unless otherwise noted.