Finn Macauley (c.1990-24 December 2012) was a member of the BSAA North American division and a member of the Alpha Team in 2012. He served under Captain Chris Redfield in Edonia along with Piers Nivans; Ben Airhart; Carl Alfonso and Andy Walker.

Macauley joined the BSAA in 2012 at the age of 22, and was assigned to a Special Operations Unit, Alpha Team, under the leadership of Captain Chris Redfield. In December 2012, the BSAA became aware of the use of C-Virus in the Edonian Civil War and prepared a major operation to engage the rebel forces, who were infecting themselves. Initially worried about his first taste of combat, his fears were relieved due to his knowledge of Captain Redfield, who he trusted deeply.[1]

The BSAA arrived on Monday 24 December in a joint operation between the North American and European branches. Macauley took up duties as the team's explosives expert, and helped in the destruction of barricades and an anti-air guns targeting BSAA helicopters.[1][2]

Macauley was attacked by Carla Radames inside the city hall, and infected with a Needle Bomb which injected C-Virus into several BSAA operators. The four men soon after mutated into Napads, and were killed by BSAA reinforcements while Captain Redfield and Piers Nivans escaped.[1]

The deaths of Macauley and the other BSAA operators forced Captain Redfield to leave the organization, becoming an alcoholic as he suffered from post-traumatic amnesia. Six months after the incident, Nivans recalled their comrades' deaths and convinced him to rejoin the BSAA to assist the organization in the Lanshiang incident.[3] 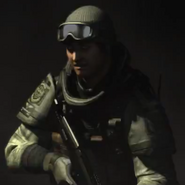 Finn and Piers in Edonia

Finn's way to become a Chrysalid 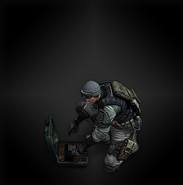 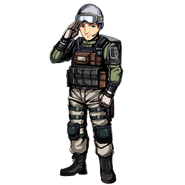