Fong Ling was a female intelligence agent employed by the Chinese Ministry of State Security until September 2002.[1]

Fong Ling's parents died shortly after her birth, leaving herself and her brother as orphans. Adopted by the state, she was raised to become an intelligence agent. When the state became suspicious of her brother's potential counter-revolutionary role as a pro-democracy activist, she was ordered to arrest him. Never questioning the actions of her superiors, she did so, allowing him to be executed by the state on the very same day. Over time, Fong Ling grew a reputation for her unquestionable loyalties, and effectively became a poster child for the ministry's hunt for spies and counter-revolutionary members.[1]

When the former Umbrella Corporation researcher-turned-terrorist Morpheus D. Duvall, having gained possession of stolen t-Virus samples, threatened the American and Chinese governments that he would launch missiles containing the virus at major cities in their respective countries if he didn't get $5 Billion, Ling, being the MSS' best agent, was dispatched to Morpheus' ship, the Spencer Rain, in order to stop him. Her American counterpart was Bruce McGivern, a covert agent working for the anti-Umbrella pursuit team, a subsidiary of the US-STRATCOM.

While Ling failed to reach Duvall first, she ended up saving Bruce's life (with a well-placed hand grenade) when Morpheus was poised to kill him upon surprising him. Duvall sustains injuries in the explosion, but escapes. Ling, however, did not initially interact with him, until she found Bruce contacting his superiors, and surprised and held him in an arm-lock. Ling coldly denied his requests for cooperation, and expresses she already knew about him from reading his dossier. Ling, upon rejecting his romantic advances, departed.

Ling closely monitored Bruce's attempts to reach Duvall's hiding place at the stern of the ship, and so took advantage of Bruce being attacked by what was unknown to be at the time an enhanced Tyrant dubbed "091", as it was only its hand that attacked through a window. She secured the valve handle needed to open the hatch to Duvall's area that Bruce dropped when he was attacked and then abandoning him. Using her assault rifle and silenced pistol, Ling blasted a path of destruction to the stern of the ship, leaving a trail of shell casings and dead zombies for Bruce to follow.

Bruce caught up to Ling as she was unscrewing the hatch, and both entered to find Duvall at the helm of a control room. Duvall, however, activated steel shutters to keep them from interfering with injecting himself with the t+G virus (Duvall was in bad shape following Ling's grenade attack). Ling and Bruce pursued, Ling running ahead after opening the hatch while Bruce was busy defeating the two Hunter Elite that Duvall had introduced them to. Eventually, Bruce caught up with Fong Ling with a mutated Duvall in pursuit. After aiding Bruce in escaping the monster, Bruce suggested they were friends, to which Ling called him a "Don-Gua" (Idiot), But when he asked what it meant she told him it meant "cool guy". Shortly after, Ling and Bruce found the ship on a collision course with a rocky cliff, and worked together to escape, fighting off zombie hordes and Duvall as they fled to the ship's helipad. While Líng escaped in a helicopter, Bruce remained to fight off and successfully defeat the "091" that had made its reappearance. Bruce escaped the ship before it crashed into the side of the cliff and was destroyed, and he swam to shore.

Unfortunately the Chinese government had, by this time, given in to Duvall's demands and would pay the ransom. This made Ling's presence obsolete and expendable. Bruce quickly tracked Ling down and, upon saving her from death by a Chinese orbiting laser platform, removed her tracking device/microchip with his knife and destroys it, rendering her undetectable. Despite her situation, Ling resolved to continue her mission, as she knew her people were in danger and Duvall wouldn't live up to his end of the deal.

The two eventually found an elevator in the disused disposal facility, and traveled down to Duvall's undersea laboratory. Duvall made an attempt to kill the agents by severing the cable, though Bruce was able to allow Ling to escape by using the emergency brake switch, while Bruce narrowly avoided death when the elevator crashed. Ling, by this time, showed increasing care for Bruce's safety, as the two had helped and saved each other's life more than once, and so she suffered after his apparent death.

As Ling explored the underwater labs, she was captured by Duvall, and witnessed Duvall and Bruce battle. While Bruce wins, Duvall survives yet again, and mutated out of control. With Ling guiding him, Bruce made his way through the maze-like corridors and reached the missile silo control room. Bruce, upon finally killing Duvall, sabotaged the missiles and he and Ling, using a submersible, escaped the base before it was completely destroyed.

Bruce implored Ling to come back with him to the United States, insisting there was nothing left for her in China. Ling kindly refused, insisting China was where she belonged. Bruce then said about "Dong Gua" (a nickname Ling gave him earlier), he said that he's truly an idiot. Surprised that Bruce knew what it really means, he revealed that he's been in China once.  As rescue choppers approached to pick them up, Ling, succumbing to her feelings for Bruce passionately kisses him, intent on a romantic relationship.

Fong Ling is playable during certain sections of Dead Aim. Her primary weapon is an assault rifle and has a handgun and knife as well. 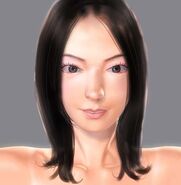 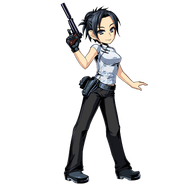 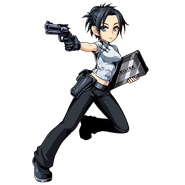 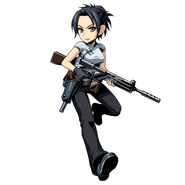 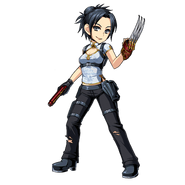 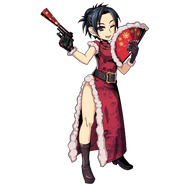 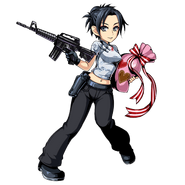 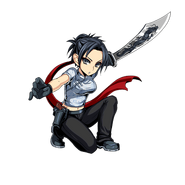 Retrieved from "https://residentevil.fandom.com/wiki/Fong_Ling?oldid=797336"
Community content is available under CC-BY-SA unless otherwise noted.