The SPAS-12 shotgun is a weapon featured as the primary shotgun in a number of Resident Evil titles.

It could be fitted with either a stamped metallic buttstock that folds to the top of the receiver when not in use, and with a pistol grip made of plastic. Solid plastic buttstocks with pistol grips were also available.

The gun uses an eight-round tube magazine, however some are modified to hold only five rounds.

The SPAS-12 is featured as the primary shotgun in a number of titles. In all cases, the SPAS-12 can only be used as a pump-action shotgun, and the semi-automatic function is never acknowledged. This gun is almost never seen with a stock in-game in most games except for Resident Evil Survivor, where its fire rate seems to be faster than most the other games. The SPAS-12 was also going to be a weapon in BIOHAZARD 1.5 and was to be used by both Leon and Elza. However, it was scrapped before the game's final release. In the outbreak series, this shotgun will inflict 150% more damage to almost every enemy in a very short distance

Chris finds the shotgun in CODE:Veronica on a compartment acting as a "key" for the stairs. If the player chooses to take it, the stairs will rise, preventing the player from proceeding. Chris has to find the same Shotgun and replace the previous ones to proceed. Claire can later use it if the player decides to put the Shotgun previously wield by Chris in the Item Box.

The SPAS-12 reappears in Resident Evil: Operation Raccoon City, under the name Assault Shotgun. Its stock is folded above the body of the weapon. The SPAS must be purchased with experience points at the pre-game menu in order for it to be used by players at the start of a mission. It is a powerful, pump action shotgun with decent accuracy and range.

The Shotgun from Dead Aim

The Shotgun in Survivor 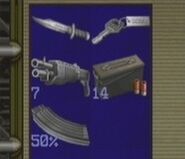 Retrieved from "https://residentevil.fandom.com/wiki/Franchi_SPAS-12?oldid=627494"
Community content is available under CC-BY-SA unless otherwise noted.