Alive (incarcerated by the Federal Government)

Dr. Frederic Downing (real name unknown) is a British virologist formerly employed by Umbrella USA and WP Corporation. He was arrested in 2005 after his role in illegal bioweapons trafficking was exposed by an FBI investigation.[2]

In the 1990s, the man who would become Downing resided in Raccoon City where he participated in the G-Virus Project at NEST, a top-secret bioweapons research facility located beneath the Arklay Mountains. In mid-1998, Downing became disillusioned with Umbrella and became obsessed with the wealth he could receive working on the black market. In mid-1998, he left the city with stolen samples of G-Virus and a strain of t-Virus. Days later, an experimental t-Virus strain contaminated the city's drinking water, resulting in a catastrophic viral outbreak. This was a blessing for Downing, as he could pretend he had died in the city and take on a whole other identity.

Though he still wanted to engage with the black market, Downing knew that viral weapons would be unsuitable without a vaccine in which the buyers could treat their men. He soon gained employment within one of Umbrella's rivals, the WP Corporation, where he eventually became the research division chief. With the War on Terror slowly escalating with terrorist groups using biological weapons, the US government initiated a defence program where the Pentagon would finance t-Virus vaccine research. Downing's relationship with Senator Ron Davis helped guarantee the WP Corporation would be awarded this contract, giving Downing the necessary tools to mass-produce both the t-Virus and a vaccine.

By mid-2005, Downing had established contact with a spy loyal to the Bajirib head of state, General Miguel Grandé, who wished to purchase his products including G-Virus. This set in motion Downing's master plan, wherein he would fake his death and destroy all research data and samples outside of his own. To advertise the t-Virus' capabilities, Downing provided a sample to an Indian terrorist movement, which started an outbreak there. The WP Corporation's vaccine was then used to stop the spread, but due to the classified nature of the project photographs of the victims were assumed by the international press to be side-effects of an unethical vaccine trial, driving protests against the company and ruining its reputation.

In the next step in Downing's plans, former WP Corporation researcher and TerraSave activist Dr. Curtis Miller was radicalised through a middle man and supplied with the necessary materials to initiate a viral outbreak in Harvardville. Miller would serve as a bogeyman that Downing's corporate sabotage could be blamed on. After the virus spread in Harvardville International Airport, the majority of the WP Corporation's supply of the vaccine was sent out to begin treatment and was destroyed by a bomb. Returning to the WP Corporation's lab with TerraSave activist Claire Redfield as a witness, Downing manipulated her into believing he and Senator Davis obtained G-Virus from the black market to plant a red herring, then left the building as Miller was scheduled to arrive. In a phone call to Redfield from outside the facility, Miller pretended he was being attacked in the computer server room and then hung up. Soon after, Miller detonated a bomb in the lab, giving the impression Downing had been killed.

In spite of his plans, Downing was ultimately caught mere hours after the explosion. Redfield herself became suspicious when she recalled hearing a bell chime during her phone call, indicating it came from outside rather than the server room. Senator Davis also denied any knowledge of G-Virus or anything suspicious in his contacts with Downing. Finally, an alert from the FBI confirmed that Grandé's spy had been detained and confessed to the entire plot. With the directions the spy gave them, Redfield and US Army operator Leon S. Kennedy cut him off on the highway while waiting for the spy, followed soon after by Harvardville police. 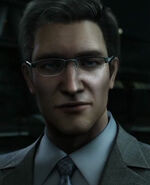 Frederic at the Harvardville Airport

Frederic with Claire inside the WP Corporation office.