The G. Launcher is a single shot grenade launcher in Resident Evil 3: Nemesis. The weapon is identified as a Heckler & Koch (HK)-Penn Arms L1(P) in the examine screen.

The G. Launcher will be found in one of two places:

The first location is the weapons cabinet in the S.T.A.R.S. office of the 2nd Floor of the Police Station. If it is not there, the Magnum will be instead. The second location is in the Substation, where the electric plant is located. You'll need to unlock both of the shutter doors there. The lower output room will contain the Fuse, and the higher output room will contain the Grenade Launcher.

The G.Launcher is a powerful weapon, second only to the Magnum in damage. Like grenade launchers in other Resident Evil games, the HG. Launcher's overall damage will ultimately depend on what type of rounds are used:

Grenade Launcher ammunition can be found in areas or made by mixing specific gunpowder combinations with the Reloading Tool. The amount produced gradually increases from just ten rounds with each creation of a specific grenade type.

Alternately, gunpowder can be combined with regular Grenade Rounds instead to make up to six Flame, Acid, or Freeze Rounds.

The standard and most common type of ammunition, these grenade rounds inflict huge area-effect damage to enemies. The Hk-p will be default-equipped with these when it is first discovered. These are the easiest ammo to make with the mixing ability.

These grenade rounds filled with incendiary liquid will set enemies and areas on fire. They are slightly rarer, and harder to create than Burst Rounds. They are quite capable of one-shotting most low-tier enemies.

Very powerful acidic grenade rounds, these will melt the flesh of zombies and B.O.W.s. Even rarer, and harder to make than the Burst & Flame rounds.The Grave Digger is weak to Acid Rounds.

The rarest of all grenade rounds, Freeze Rounds will not only inflict great damage to enemies, but also freeze them in place for a few seconds. The Nemesis is particularly vulnerable to Freeze Rounds, though he is still capable of walking slowly while frozen. Very few Freeze Rounds will be found in-game, and require the most gunpowder to handload. 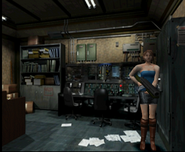 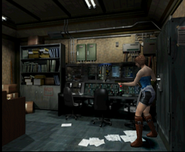 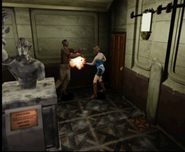 Jill firing a burst round at a zombie 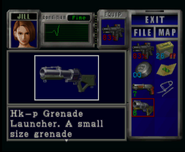 Retrieved from "https://residentevil.fandom.com/wiki/G._Launcher_(RE3)?oldid=832396"
Community content is available under CC-BY-SA unless otherwise noted.