G Type 2 is an action figure manufactured and sold by Moby Dick as part of their "BIOHAZARD 2 Figure Video" series of toys. The figure is of Dr. William Birkin in his G2 form as seen in Resident Evil 2. A limited edition black variant of this figure also exists.

This figure stands approximately 9 to 10 inches in height and features a rather detailed paint job. The figure itself is very light for its size thanks ot the PVC plastic.

This figure features rotation articulation on the shoulders, elbows (all four arms), and waist. The claws on this figure are very sharp, particularly the thumb and little finger claws which aren't nearly as dulled down as the others. Caution should be advised when handling this figure as a result to avoid cuts.

The figure comes packaged with a VHS which is advertised as "A message from the CAPCOM crew". The black variant does not come packed with this VHS. The VHS itself is encased inside a plastic sleeve with a piece of paper acting like a cover inside. Inside is also an advertisement for other Biohazard related merchandise. 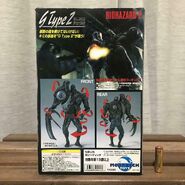 Internal card with figure.
Add a photo to this gallery

Left Side View
Add a photo to this gallery

VHS Side Label
Add a photo to this gallery

Retrieved from "https://residentevil.fandom.com/wiki/G_Type_2?oldid=827973"
Community content is available under CC-BY-SA unless otherwise noted.