Gary was an elderly civilian living in Raccoon City at the time of the t-Virus outbreak. Gary was shot through the back during the outbreak and likely died soon afterwards.[1] It is likely that he was to be featured prominently (and injured/killed) in an unfinished scenario, since he has two costume versions and a proper name in both Resident Evil Outbreak and its sequel,File 2.

Gary A's Stats are as follows:

Gary B's Stats are as follows: 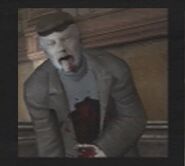 Gary's "B" skin.
Add a photo to this gallery

Retrieved from "https://residentevil.fandom.com/wiki/Gary?oldid=732258"
Community content is available under CC-BY-SA unless otherwise noted.