Deceased
The Gatling Gun Majini are enemies that appear in the latter portions of Resident Evil 5 along with its unlockable content/DLC. They are very large muscular men that wear a beret and a pair of sunglasses. They also have a cigar in their mouths, a yellow or red vest, a necklace around their necks and army cargo pants. They carry a gatling gun that has an ammunition container mounted on their backs.

Gatling Gun Majini are the only sub-bosses in the game that don't drop treasures. The three you encounter in story mode all drop Key Cards.

Melee attacks can be used on them when the enter the following animations.

He also appears on the DLC campaign, Desperate Escape, attacking Josh Stone and Jill Valentine. He only comes out however, when played on Veteran or Professional. Although, this is not entirely true, as one might come out of the cargo container and elevator on normal and amateur mode, only if the player is fighting town Majini; if the player is fighting base Majini, a Red Executioner will come out from the elevator instead.

In the Mercenaries Reunion, at the Experimental Facility, after a certain amount of points have been obtained he will appear.

When you're playing Slayer modes, he will sometimes be at the Experimental Facility. 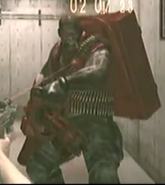 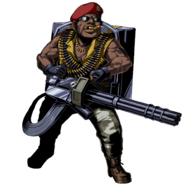 Gatling Gun Majini in Minna to BIOHAZARD Clan Master.
Add a photo to this gallery

Retrieved from "https://residentevil.fandom.com/wiki/Gatling_Gun_Majini?oldid=680857"
Community content is available under CC-BY-SA unless otherwise noted.