Start a Wiki
watch 01:50
The Loop (Games)
Do you like this video?
Extracanonical subject
(Unique game aspects not part of story canon)

Ghouls 'n Homunculi is a minigame for Resident Evil: Revelations 2 that is unique to its Nintendo Switch port. The game is an adaptation of Ghosts 'n Goblins with the graphics based on Ghouls 'n Ghosts, featuring Barry Burton in place of Arthur the Knight.

This minigame is available by default in Raid Mode. To the right of the Red Door there is a propaganda poster which leads to it.

There is only one level in it that loops once completed, the level is a copy of the first level in the original Ghosts 'n Goblins for the NES, the items Barry can pick up will be turned into Gold and BP, both of which are currency used in Raid Mode. Much like the original games, if Barry takes a hit his clothes get removed, another hit during this state will kill Barry and he will have to start from the beginning.

The music played throughout the level is an 8-bit remix of Lost, the soundtrack played in the main menu in Revelations 2.

The weapons Barry can use are also based on weapons used in the main campaign, there is a knife which is used as a projectile (just like the Dagger in Ghosts 'n Goblins), a pistol that pierces through enemies and a Firebomb Bottle that works exactly as the Torch in Ghosts 'n Goblins.

Barry in the minigame, if he gets hit once, his clothes fall off the same way it happens to Arthur the Knight.

Vulcan Blubbler, the boss of the level. 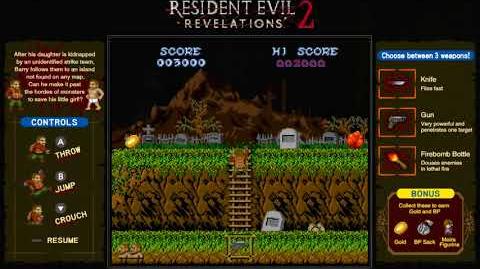 Retrieved from "https://residentevil.fandom.com/wiki/Ghouls_%27n_Homunculi?oldid=809160"
Community content is available under CC-BY-SA unless otherwise noted.