Experimental B.O.W.
The Giant Moth (モス・ジャイアント, mosu jaianto?) was an experimental Bio Organic Weapon developed by Umbrella. They should not be confused with the Moth, another infected insect, which is smaller in size.

Giant Moth research was conducted in the NEST underground facility. During the Raccoon City Destruction Incident, at least one moth escaped its chamber and made the B5F computer room its nest, using the facility's air conditioning system to hunt in the main shaft and bring prey back. Another Giant Moth was present on Sheena Island during its own biohazardous outbreak. Like its fellow, it also experienced the same problem regarding its exaggerated proportions.[1]

The research into moth-based B.O.W.s was a failure in this experiment. Mutating to a larger size normally did not keep them in proportion, making their wings strong enough only to hover over the ground. However, they did also develop the ability to spit poison on prey as a means of compensating for their flight problems.[2]

Use the grenade launcher, preferably with incendiary rounds or shotgun against it. If playing as Leon using the flamethrower may burn her wings off and the player can simply avoid the crawling body.

If you aren't playing with Yoko, use the shotgun against it because you will be captured and poisoned if the moth isn't killed. Yoko also needs to kill the moth in harder difficulties because the poison drains your health quickly.

Ignore them. If you wanna fight, use the shotgun and pay attention to not be attacked by the other one.

Artwork of the Giant Moth from Resident Evil Outbreak File #2

Artwork of the Baby moth from Resident Evil Outbreak File #2 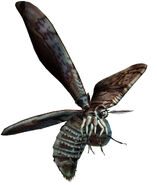 Giant Moth in Below Freezing Point.