The Green Gem is a treasure item that appears in Resident Evil 4. It is a rare gem that can be set into the Elegant Mask, along with the Red Gem and Purple Gem to increase its value. Alone, it can be sold for 3,000₧.

There are 2 found in main game. The first is found in Chapter 2-1 after you fight Del Lago, on top of the Merchant's hut.

The second is found in Chapter 3-1 on a wall where you first meet Salazar in the Gamecube version. In all other versions, the second one is switched with the Gamecubes' Purple Gem location in Chapter 4-1 on a statue, the same room where the King's and Queen's Grail are placed.

In Chapter 1 of Separate Ways, one can be found in the locked building in the village center. After you pass the merchant the gem will be in a box in the cave section.

The location of the second Green Gem could have been switched to make the game slightly easier. Players are likely to miss either the Red or Purple Gem in the village because of the split paths, so the switch gave some players a chance to compete their first mask instead of ending up with two greens and one non-green gem. 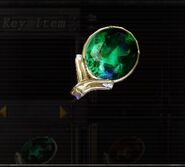 Retrieved from "https://residentevil.fandom.com/wiki/Green_Gem?oldid=484771"
Community content is available under CC-BY-SA unless otherwise noted.