One of three different herbs found growing in pots around the Arklay Mountains and Raccoon City, along with the Red Herb and Blue Herb. The Green and Red Herbs are also found in Spain (along with the new Yellow Herb) as well as Africa, and the Mediterranean. The Green Herb is later found in China, Eastern Europe and elsewhere in the United States.

The Green Herb is used for Physical Strength and has appeared in every game in the series to date. Combining Green Herbs with Red Herbs, Blue Herbs, and Yellow Herbs can have significant health benefits, such as health being completely restored, poisons being cured, and maximum health being increased. Likewise, combining one (or two Green Herbs in some games) with another Green Herb will raise the herb's potency, thereby increasing its health restoration amount.

In a majority of the series, the Green Herb can be mixed with Red and Blue Herbs which will either increase its potency or give it antidote properties on top of its own healing properties. All three can be combined to create a powerful herb that cures poison, as well.[notes 1]

Green and Yellow Herbs (RE4)

Green Herbs make a return in Resident Evil 4, along with Red Herbs. There are no Blue Herbs as poison has been removed, however Green Herbs can now be combined with new Yellow Herbs. Combining a Yellow Herb with the Green Herb acts as an additive to give the herb combination the ability to permanently raise the overall health of the user.

In Resident Evil 6, Green and Red Herbs both return. However instead of using the herbs directly to heal, the herbs can be turned into tablets that can be placed in a storage case. When the tablets are placed in the storage case, they can be automatically used in-game through a button press. Different mixtures give a different number of tablets. One tablet will heal one block of health for any character, the max health being six blocks.

In Outbreak and Outbreak File #2, the Green Herb and other herbs function mostly the same. The difference is that every herb and herb combination is capable of staving off the t-Virus infection of players briefly. Although they are not as substantial as an Anti-Virus, it is still incredibly helpful. Also, it will stop the effects of the Nerve gas, in the Desperate Times scenario.

In the 3DS title, Resident Evil: The Mercenaries 3D, Green Herbs are the only herb and healing item found. Some characters start with them and otherwise, they can be dropped by enemies when defeated. In Mercenaries 3D, the effectiveness of a Green Herb is dependent upon the character that is being played.

In some titles, Green Herbs are used solely by themselves and are the only herb found. Gun Survivor 2 and Dead Aim feature only Green Herbs (along with First Aid Sprays) that heal a small bit of health.

In Revelations, Green Herbs can be found through the scanning mechanic, or picked up throughout the normal course of gameplay in Raid Mode. The number of herbs the player can carry is five. As they are the only healing items available, they heal the player 100%, and with certain weapons attachments in Raid Mode, can also heal a nearby partner.

In Umbrella Chronicles, Green Herbs are found and used automatically and are very uncommon. This changed in Darkside Chronicles, where they can be stored in the inventory and used manually by pressing the "+" Button.

In Resident Evil Gaiden, Green Herbs are accompanied with Yellow, Red, Blue, and Purple Herbs but there is no herb mixing.

Green herb from RE2, RE3 and Survivor 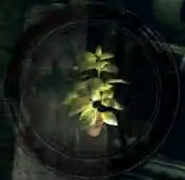 Herb (Green) pickup icon in RE5

Herb (Green) inventory icon in RE5

Retrieved from "https://residentevil.fandom.com/wiki/Green_Herb?oldid=770104"
Community content is available under CC-BY-SA unless otherwise noted.