Accidental
For the creatures in Resident Evil 2 (2019), see Ivy Zombie.

Green Zombies were a form of human mutant which were encountered in the Arklay Mountains in 1998.

When an abandoned hospital within the mountains was taken over by mutant plants, mutant humans infected with the t-Virus were parasitised by its saplings, which took up root deep within their bodies. While bodily identical to any other Zombies, Green Zombies were protected by the plants, and would release a poisonous fog if the host was attacked, or otherwise release the fog if the Zombie attacked another.

The only attack unique to Green Zombie over standard Zombies is "Poison Spore", where the parasitic plant inhabiting the Zombie releases its spores during a fight. 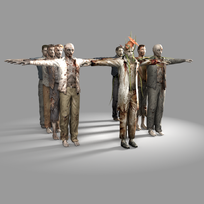 Green Zombie with other zombies 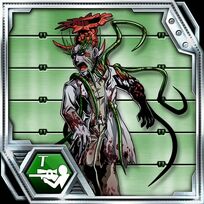 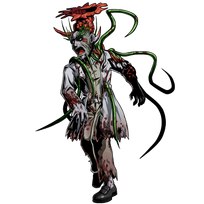