Greg Glenn was a member of S.R.T., a special forces unit sent into the Harvardville Airport to rescue a member of the US federal government's senate from the t-virus.

Out of the team, only Greg and Angela Miller were sent in to the Airport; under instructions from Leon S. Kennedy who also participated, to rescue the civilians in the airport. He is armed with an M4 assault rifle.

During his time in the airport, he repeatedly mocked Leon as well as the undead. He unleashed a barrage of bullets on a large group of undead, and thinking he had killed them all, he begins to walk down the hallway.

As he does this, a female zombie that Angela previously failed to kill bursts through a glass window and tries to bite Greg. However, Leon shoots the zombie and saves Greg, leading Greg to see the direness of the situation, as well as respecting Leon.

After finding the survivors however, he is bitten by a hidden zombie while attempting to escape. He shoots the zombie with his pistol, then volunteers to stay behind and hold the horde off. As the others continue to escape, he fires into the approaching crowd.

A short time later, his zombified body is seen stumbling toward the survivors amongst the ranks of the undead. He is later killed by the United States Army sent to perform a cleanup operation in the airport. His death angers Angela as she and Greg had been long time partners and buddies in the S.R.T. 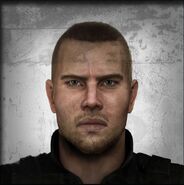 Greg and Angela
Add a photo to this gallery

Retrieved from "https://residentevil.fandom.com/wiki/Greg_Glenn?oldid=800138"
Community content is available under CC-BY-SA unless otherwise noted.