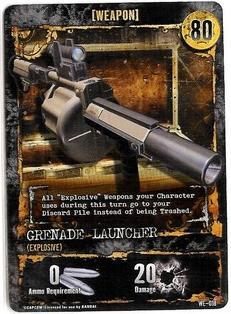 The Grenade Launcher is a weapon card in Resident Evil: The Deck Building Game. It is introduced in Alliance, the first expansion set. The grenade launcher is considered the "special weapon" for the Flash Grenade (WE-017) and is found in the same pile of the Resource Area. Like all "Explosive" type weapons it requires no ammo to use, but deals 20 Damage. Additionally, its effect mirrors one of the effects of Jill Valentine from the first set; all Explosive type weapons your character uses are discarded, rather than trashed. This let's the player circulate the Explosive weapons they've used into their deck instead of forcing them to buy them again. Since the original card is not available in Alliance, this effect was most likely carried over intentionally. The Grenade Launcher has a gold cost of 80.

Retrieved from "https://residentevil.fandom.com/wiki/Grenade_Launcher_(WE-018)?oldid=779892"
Community content is available under CC-BY-SA unless otherwise noted.