When compared to the other sniper rifles, it has the weakest firepower and the smallest capacity, but also the most powerful zoom for the scope and the shortest reload speed. It also wavers the least, by far, when scoped.

It costs 15,000 Exchange Points to buy infinite ammo for the weapon.

It takes a total of ₦68,000 to buy and fully upgrade the PSG-1 or just ₦64,000 because the player can obtain the weapon through the course of normal gameplay.

The weapon is shown to have the fifth characteristic "Semi-auto" indicated it can be fired without taking breaks between shots. 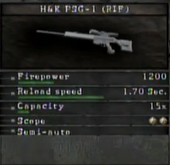 Fully upgraded in the item management menu.
Add a photo to this gallery
Retrieved from "https://residentevil.fandom.com/wiki/H%26K_PSG-1_(RIF)?oldid=639257"
Community content is available under CC-BY-SA unless otherwise noted.