H.C.F. was the private special operations unit of Umbrella's rival company. Their most notable characteristic is the all-black combat fatigues they wear.

The H.C.F. are a highly trained group of soldiers under the direction of Albert Wesker. When they were established is unknown. When Wesker joined the mysterious company, he was ordered to acquire the newly discovered t-Veronica virus. H.C.F. was deployed to Rockfort Island on December 27, 1998[1] to retrieve a sample from Alfred and Alexia Ashford. They used assault planes to bomb the island and damaged much of its facilities.

The attack led to a leak of the t-Virus from the labs, which infested the island. As the mission progressed and agents explored the island, Wesker kept in radio contact with his men in case an objective update was needed or a difficulty arose. Whenever such things occurred, Wesker, with his viral enhancements, would be incredibly fast to respond and get to his operators' location. It was revealed that Alexia and t-Veronica were not on the island, but at an Antarctic outpost.

Immediately upon finding out Alexia's true location, Wesker and the H.C.F. abandoned Rockfort Island and went to Antarctica. Alexia was later destroyed by Wesker's nemesis, Chris Redfield, after she had mutated several times. Wesker and his men were robbed of the only living host containing a viral sample of t-Veronica with Alexia's demise. Wesker was undaunted by this change of events, however, as the corpse of the formerly mutated Steve Burnside was left intact, and he still had a surviving sample inside him.

Wesker ordered his men to retrieve Steve's body and were successful in getting a t-Veronica sample from it.

In 2000, H.C.F are collaborating with the crime syndicate called, The Connections. 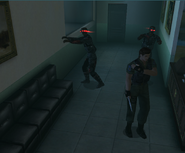 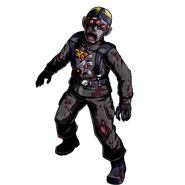