Start a Wiki
watch 01:31
The Loop (Games)
Do you like this video?
Prime universe
(Capcom's primary storyline)

HUNK appears in The Fourth Survivor. In order to unlock The Fourth Survivor minigame, the player must beat both Leon and Claire's scenarios and at least receive a 'B' and 'A' Rankings. HUNK has 120HP and eight inventory slots which contains:[citation needed]

HUNK is playable in this game but only by means of a cheating device, such as a Gameshark. He has two versions, both of which were intended to be unlocked via some event in a dropped scenario, since they both have proper stats. HUNK A (which features him unmasked) and HUNK B (which features him with his signature Gas Mask). Both are Kevin-Type characters. This means that both versions can perform pot shots like Kevin and start with .45 auto pistols as their Personal item. They can also use Kevin's kick and Elbow Charge.

* this is an estimate based on comparisons with other characters with known stats.

HUNK A's attack power is among the highest of all NPCS. Surpassed only by Axeman and Mr. Gold. With potshots from his 45 Auto, he's capable of delivering heavy damage to zombies, even on higher difficulties.

HUNK is a playable character in the non-canon minigame, The Mercenaries in Resident Evil 4. His appearance has been redesigned since Resident Evil 2 as he now wears an entirely different outfit. HUNK is unlocked by getting a 4 star ranking on Stage 3. He is armed with only a Custom TMP. It appears different from the regular TMP but functions like a partially upgraded one however, the key difference is HUNK will aim his from the shoulder as opposed to the hip making lining quick head shots much easier.

The stats for HUNK's TMP are:

He is also armed with 50 extra TMP rounds, three hand grenades and a first aid spray. This light load keeps HUNK's inventory very open and uncluttered, with an extra 42 spaces free (10x4+2). Because it is unlikely that his case will be filled completely during the course of a mission, inventory management is negligible. The only items that his foes will drop are grenades, TMP ammunition, and healing items. HUNK's health meter is 7 bars long, and he can take a fair beating, but is not by any means the most resilient Mercenary. Only Ada is weaker, with 6.5 bars. He can take 5 hits from normal villagers before dying, and only 3 from stronger enemies, such as Stun Rod-wielding Ganados or strikes from a Garrador.

HUNK has two melee moves. When an enemy is stumbling from a head shot, he can use the Neckbreaker move which always instantly kills. This can be used on the Chainsaw Sisters but it can not on the other bosses. When an enemy gets hit in the calf or kneecaps and falls to their knees, HUNK can use his own self-explanatory "Kick" move, which can knock an enemy back several yards. The kick move involves HUNK winding back and swinging his leg across with such force he lifts himself off the ground and almost stumbles the landing. Although this can break up a group of enemies, it is intended to knock foes back and is usually not a one hit kill. Since HUNK's TMP burns ammo quickly, a skillful player must rely on HUNK's takedowns more than any other character to survive, HUNK also does not have a Knife, thus a player cannot simply slash a Ganado in order to perform a Neckbreaker.

HUNK is a playable character in Resident Evil: The Umbrella Chronicles. He is played in the "Fourth Survivor" scenario which is a retelling of "The 4th Survivor" sidegame from Resident Evil 2. His handgun is the "Matilda". On the select equipment screen, the Automatic Pistol will be selected for HUNK by default. His melee attack involves him first performing a spinning back fist to knock the zombie off him, then moving in on them and performing a neck break. This attack will always kill the zombie and notably will push many enemies away as HUNK covers a lot of distance going up to them to do this (enemies are automatically pushed away when the character comes in contact with them during melee attacks).

In the non-canon game Resident Evil: The Mercenaries 3D, HUNK is one of the three starting characters, alongside Chris Redfield and Jill Valentine. HUNK's alternative costume is called Mr. Death, which is unlockable by getting A-rank on ALL Mission Level (except Level Ex).

His weapon set is:

His melee moves are: 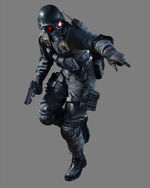 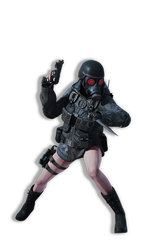 HUNK is a playable character in Raid Mode on the ported version of Resident Evil: Revelations.

HUNK also has a DLC outfit called LADY HUNK. LADY HUNK utilizes Jill Valentine's sweep kick attack from Resident Evil 5 and she has her own intro and ending voice clips, however she re-uses Rachel Foley's voice commands. The DLC came out on June 11 along with Ooze Rachel for $2.99 or 240 Microsoft Points.

HUNK returns in The 4th Survivor of Resident Evil 2 remake. In order to unlock this mode, the player must complete either Leon's or Claire's campaign and then complete the unlocked campaign for the alternative character.  HUNK is equipped with a wide range of weapons and equipment, and has 20 inventory slots.

Retrieved from "https://residentevil.fandom.com/wiki/HUNK/gameplay?oldid=802869"
Community content is available under CC-BY-SA unless otherwise noted.