HUNK was a member of the Umbrella Security Service in 1998, and was a major participant in Umbrella's acquisition of the G-Virus.

The U.S.S. Alpha Team was aided by the new Delta Team (also known as "WOLFPACK") in their mission into the underground laboratory to obtain the G-Virus sample from William Birkin. He left his team to meet up with Delta team and brief them in on the mission, leading to him having to take on numerous U.B.C.S. mercenaries that Birkin had bought to his side and US Army Spec Ops assigned to retrieve the G-Virus for the US government.

Meeting with another Alpha team member, the two of them entered Birkin's lab and obtained the samples after a short gunfight. Making their way further up the laboratory to meet up with GOBLIN 6, HUNK found that they had evidently left Birkin a sample of the G-Virus - he had mutated into a hideous creature. Making their way out of the facility, HUNK found that he had lost the G-Virus samples and elected himself to retrieve them in favour of abandoning the mission (and his men having thus died in vain). Delta team's last sighting of HUNK was of him preparing to make contact with Birkin.

HUNK delivers a kick to the back of a targeted enemy's leg and then proceeds to slit their throat. If equipped with  Active Camouflage, HUNK transforms as the target.

Enemy types are identified by corresponding symbols. You are also notified whenever you are targeted by an enemy.

A report about HUNK from the ARG

An Eye Witness report about HUNK 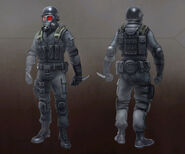