Hand Gun (ハンドガン, handogan?) is weapon in Resident Evil 3: Nemesis. It is a gameplay representation of Jill's Samurai Edge in lore.

The Hand Gun starts as part of Jill Valentine's inventory on the Hard Mode. In Easy Mode, it is in the Item Box.

The weapon has a magazine capacity of 15 H. Gun Bullets. It is a preferred choice when fighting lesser enemies such as zombies and Zombie Dogs. However, due to the limited power of its bullets, it tends to be rather useless against stronger enemies such as the Hunters.

The gun is also able to chamber enhanced ammunition, which increases its firepower.

The M92F Enhanced is created by loading H.G. Bullets E into the Hand Gun.

While the enhanced ammunition does not change the Hand Gun's appearance or its magazine capacity, the weapon has a noticeably different "boom" when firing.

In performance, the M92F gains stronger firepower. The gun also gains stronger recoil, but unlike the M3S Enhanced, it doesn't cause Jill to move back significantly.

With the Hand Gun's enhanced power, it often knocks back a zombie with one shot and requires less rounds to kill it. It is also now ideal for fighting stronger enemies, even Nemesis.

Standard and enhanced ammo have the same characteristics, with the exception of damage dealt to enemies. Here is the table for comparing how many bullets the enemy can take before dying: 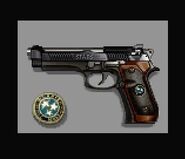 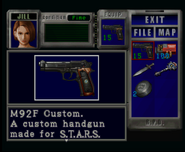 Retrieved from "https://residentevil.fandom.com/wiki/Hand_Gun_(RE3)?oldid=833969"
Community content is available under CC-BY-SA unless otherwise noted.