Resident Evil 4
The Handgun (ハンドガン, handogan?) is the starting weapon in Resident Evil 4. If it is sold during the game, it can be purchased from the Merchant for 8,000₧. Handgun uses Handgun Ammo and it takes up 6 spaces in Leon's inventory (3x2). Of all the handguns, it has the most unsteady aiming in the game. However, it is the cheapest to upgrade. This weapon is always shown during cutscenes where Leon uses a handgun.

The Handgun's Exclusive upgrade multiplies its critical headshot ability by 5 times. This makes the gun ideal for shooting ganados in the head.

The Handgun appears in the Shooting Range mini-game. It is part of the “Sniping” weapons set. Here it has a capacity of 16 rounds, default firepower, and reloading speed 1.47.

The gun also appears in the Mercenaries mini-game as part of Albert Wesker's load out. His Handgun is fully upgraded and comes equipped with a removable Silencer. The Silencer takes up 2x1 blocks of inventory. With the Silencer equipped, the sound of each shot is noticeably dampened. Using it causes Ganado to not be automatically alerted to Wesker's presence. This allows the player to covertly take out Ganado until one of them raises the alarm. However, the Silencer will still keep the Garrador from hearing the gunshots in Stage 2.

Leon with his handgun

The Handgun when fully upgraded

The Handgun in the RE4 shop menu

The bore of the handgun 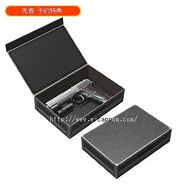 The 1/6 scale handgun model.
Add a photo to this gallery

Retrieved from "https://residentevil.fandom.com/wiki/Handgun_(Resident_Evil_4)?oldid=826978"
Community content is available under CC-BY-SA unless otherwise noted.