It has a high firepower having a 200 firepower but suffers greatly due to its slow firing speed having only 0.70 Rate of Fire and a capacity of 7. Like the Handgun M92F, it has 3 customization slots. During Chapter 10: Tangled Web, when Jill picks up and help the wounded Parker, she temporarily uses Parker's handgun but the traits from Jill's equipped handgun temporarily gets carried over to his handgun. Jill can also acquire it by turning back to the ledge where Parker fell to his "death".

The stats in Campaign carries over in Raid Mode. Compared to other handguns it remains with the high firepower, slow firing speed and low capacity but with an even slower reload speed. Characters with the Handgun Mastery skill can speed up the reload speed of this weapon. It is usually seen with less than 3 customization slots.

The Handgun Government has 3 customization parts. Due to the slow firing speed and low capacity, it is recommended to fill the slots with these custom parts:

Downed Parker with his handgun. 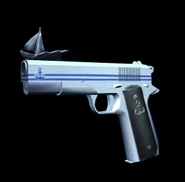