The Handgun MPM is a weapon featured in Resident Evil: Revelations 2 found by Claire Redfield.

The following is a translated adaptation of a data chart found in the BIOHAZARD REVELATIONS 2 ULTIMANIA guide.

The MPM can be found in the same room as the Medical Ward Key on the body of a guard. 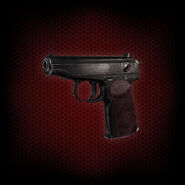 RE.net image
Add a photo to this gallery
Retrieved from "https://residentevil.fandom.com/wiki/Handgun_MPM?oldid=839204"
Community content is available under CC-BY-SA unless otherwise noted.