Help at Last! is a blog written as part of the "Experience Kijuju" ad campaign for Resident Evil 5.

I heard another man being dragged up the scaffolding to meet his death today. It'd become so commonplace that I learned to just cover my ears to block out the curses of the doomed men whenever it happened. Even with my ears covered, I could still feel the thud as the ax robs one more individual of life. And the cheers of the crowds continued to fill me with fear and dread. I might have said a prayer in my heart for this poor man (at least I thought I did), but I didn't give him anymore thought. I couldn't believe how numb I'd become to it now. Another day, another execution. Or so I thought.

This time didn't end with the cheers of the mob. Instead I heard gunshots. Confused by this, I carefully drew back one of the curtains to see what was happening outside. (I did this at a great risk to my own life, mind you.) I saw a man and a woman inside an adjacent building surrounded by that mob. I thought they were goners for sure, but then I noticed that they were the ones holding guns. It must have been them that fired those shots! The two of them worked as a team as they ran into the square and took out as many of those crazies as they could. I should have been shocked to see more death, but I think I was more shocked just by the presence of those two.

While I was watching them, I heard a helicopter come out of nowhere and fire a missile at a huge steel gate. The shockwaves rocked my house like an earthquake. I don't think anyone near the blast could have survived. When I looked out of my window again, I saw that everyone except that man and woman had disappeared. I guess they're afraid of missiles.

It looked as if things had calmed down, so I grabbed my binoculars to get a better look at these two crazy people. I mean you have to be crazy to think you can take on thousands of people acting like rabid dogs! The woman looked like she was from around here. She was wearing sporty clothes, and she had a gun belt and a large knife. It looked like she knew how to use them. The man was wearing similar clothes, but underneath his gun belt he wore a shirt that looked like some kind of uniform. He looked pretty beefy, like an 80s action movie star. I saw he had a badge on his sleeve that said BSAA. When I saw that badge, so many things just fell into place for me. To the best of my knowledge BSAA only gets involved in situations dealing with bioterrorism. I bet you somebody unleashed a virus or something to make everyone start acting so out of control. It could be like a super version of mad cow disease.

Whatever it really is, I'm sure the BSAA brought some vaccines to help everyone. Thank God for that. I also hope they brought some whiskey with them, because I haven't had a drink in forever. Wouldn't mind sharing a drink or two with that cute female BSAA agent either. I'm sure she knows a few good moves.

At any rate, I'm going to be OK! Thanks to everyone out there who got the word out. Now I can go back to writing about the important things – booze and babes! 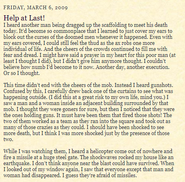 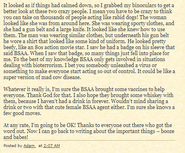 Retrieved from "https://residentevil.fandom.com/wiki/Help_at_Last!?oldid=800074"
Community content is available under CC-BY-SA unless otherwise noted.