Start a Wiki
watch 02:27
The Loop (Games)
Do you like this video?
Real World article
(Written from a Production point of view)

Heroes Mode is a multiplayer gameplay mode featured in Resident Evil: Operation Raccoon City. It is a competitive, team-based gametype wherein players assume the roles of "heroes" from the Raccoon City Outbreak. Each character will have their own unique abilities. Alongside the other team, players will also have to contend with a variety of B.O.W.s.[1]

The U.S.S. team are based on the antagonists or Umbrella allies of Resident Evil 2 and Resident Evil 3: Nemesis, except for NIGHT HAWK, who is based on an unseen character in The Umbrella Chronicles 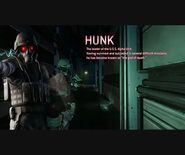 Retrieved from "https://residentevil.fandom.com/wiki/Heroes?oldid=690943"
Community content is available under CC-BY-SA unless otherwise noted.