Dr. Hersh was a medical doctor at Raccoon General Hospital who chose to stay and treat the sick and wounded for as long as possible. He is the last surviving member of RGH's staff and, upon realizing the futility of the situation, he attempts to escape alongside the survivors. He appears to be of Indian descent and has a British accent.[1]

A group of survivors encountered Dr. Hersh when they sought shelter inside RGH, attempting to locate medical supplies. He explained to the survivors that the hospital was no longer a safe place to stay and that they should escape as soon as he could find a way to repair the elevator.

Upon restoring power to the elevator, Hersh made his way back to the survivors, only to be attacked by what appeared to be a corpse infested with leeches. As he attempted to escape by climbing over a makeshift barricade, he fell, causing the injury on his left hand to bleed profusely. Upon regaining his composure, he realized his wounded hand had attracted the leeches, sending them into a frenzy. He screamed as the leeches overwhelmed him.

His body was used by the leeches as a base for their form, moving him like a marionette in search of other survivors in order to feed on their blood. The leeches that controlled him were killed in the Fixed Temperature Laboratory, when the survivors managed to lure them into a trap, boiling them alive. Once the leeches had died, Dr. Hersh's lifeless body fell to the ground, wherein the survivors finally learned of his grim fate.

Dr. Hersh is unlocked as a playable character in File #1 by completing The Hive on VERY HARD difficulty, and is already unlocked in File #2. The set where he appears in costs 4000 and 400 points, in File #1 and File #2, respectively.

Dr. Hersh is a George-type character. He starts in DANGER status with a Hemostat as his starting item.

There is another version of Hersh that can be played as well, but only through cheating devices, such as gameshark. However, unlike the regular version, it lacks proper stats, making it impossible for him to do damage to enemies and he will run very slowly. This version must be given stats via a stat modifier code in order to be fully playable. Visually, it doesn't look much different from his standard version; however, the lower jaw is somewhat buggy and will stretch to awkward positions. This version also has a more noticeable bloodstain on the bandage on his hand. This may be the model used when he first introduces himself to the survivors. 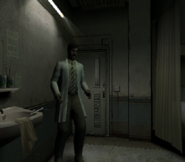 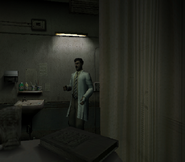 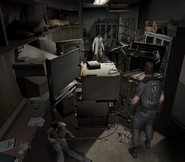 Hersh seen in the back of the Nurse's center

Jim realizes Hersh is the host.

Prerelease photo of Hersh being encountered in Below Freezing Point.